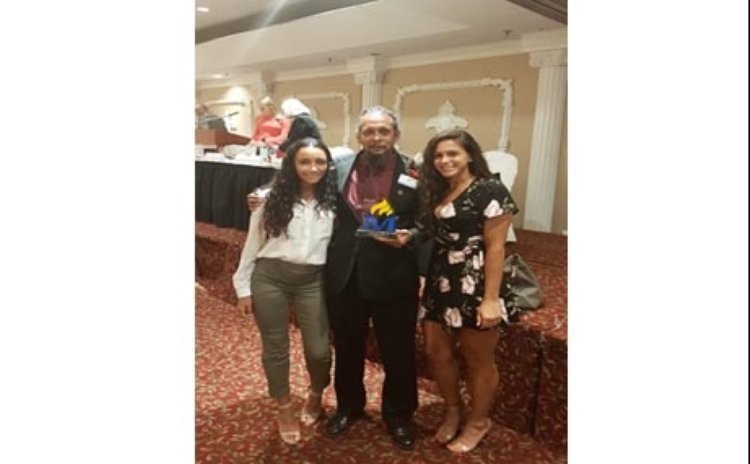 Bertrand with daughters Kylee and Kira at banquet

Dominican-Canadian Football Coach Trevor Bertrand was honored at the 44th Annual Mississauga Sports Council awards and Hall of Fame dinner which was held on Wednesday, June 13th for his outstanding contribution, time and service to football in Mississauga. The city of Mississauga neighbours Toronto on Lake Ontario and is Canada's sixth-largest municipality with a population of approximately 750,000 residents. The purpose of the Sports Hall of Fame is to ensure that the accomplishments of Mississauga's athletes, coaches, managers, sport builders, officials and volunteers who achieved outstanding results and made exceptional contributions in their respective pursuits of sports excellence are publicly recognized, honored and appreciated.

Bertrand has held the positions of VP of Girls', Director of Competitive and Director of Development. In 2010 he was elected President of the North Mississauga Soccer Club (NMSC). He served in that capacity for seven years. In 2014 as Head Coach the U17 Girls team won the Canadian National Championship, the provincial title, and the Ontario youth title and was voted the best amateur soccer team in the city of Mississauga. In 2015 the club won the first Women's League 1 Ontario Cup championship. League 1 Ontario's main focus is the development of Canada's future stars. In 2016, NMSC became the first club in the city of Mississauga to achieve the Ontario Provincial Development League (OPDL) License and to implement the Panther Stars (special needs) Programme for players with physical and intellectual disabilities between the ages of 5 and 30 years.

His two daughters Kira and Kylee are dominant players on the Dominica Women's National Team. He currently sits on the Board of the Peel Halton Soccer Association.