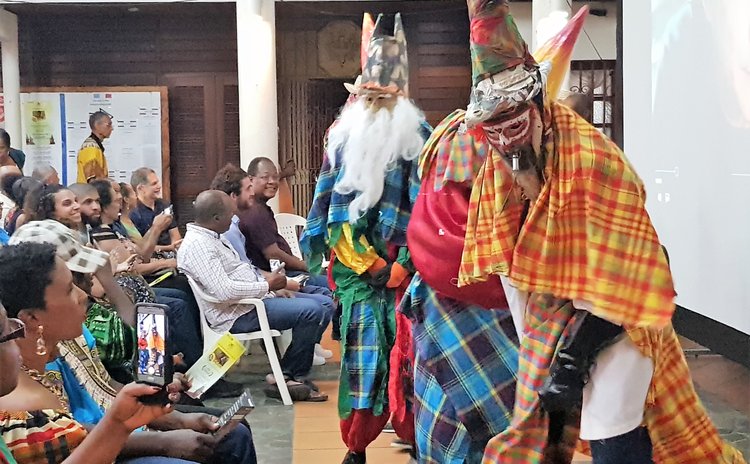 Movie Pays On the occasion of Dominica's first Bouyon Day, and by popular demand, a second screening of the Alwin Bully Film "Oseyi and the Masqueraders" which features a strong Bouyon soundtrack, will be screened, not on Bouyon Day (due to various constraints) but two nights later on Thursday 28th February. But the intent remains the same – the importance of embracing our culture and promoting our more recently created music genres.

The creators of "Oseyi and the Masqueraders" demonstrated an acute understanding of this. From the very opening of the movie a smooth Bouyon rhythm called Sook Pak Riddim underscores Dennis Joseph's rich baritone voice as he introduces the peaceful atmosphere which usually defines the community before the vibrant African Bann Mov Drums kick in and carry us into the heart beat of this age-old tradition.

Bouyon Music is also used in this carefully conceived movie when, Oseyi, the central character, leaves his home on carnival Monday morning and walks up the road to his grandmother's house. He knows that he will have to face his greatest fears that day. The Bouyon there starts with solemn drums and dramatic pauses, informing us that we are entering the climax of the story when Oseyi will either be defeated by his fear or rise triumphantly above it. It's all in the music.

The other areas in which the music is effectively used is at the costume yard scene. This opens with a gusty full-throated rendition of that Carnival standard – "Solomon Wolé "– by the incomparable folk singer, cultural enthusiast, and multitalented Delia Cuffy-Weekes. She makes love to each note giving it full range and poignant meaning.

The piece was arranged by Pearle Christian

In the Carnival Monday scene, a group of ladies elegantly clad in the National Costume bring grace and joy to the streets of Colihaut while singing "Mi Nou," an old Carnival Masquerade folk song.

Another Bouyon beat entitled SivArt Riddim takes us through the credits and to the end of the film.

In short, "Oseyi and the Masqueraders" is a feast not only for the eyes but also for the ears and soul of music lovers everywhere. It has also been as described as:

"Huge story in a small package!" "Alwin Bully takes the Bann Mové and transforms it from a simple African retention into an almost spiritual practice that must take its place, along with Bele, Quadrille, Sensay and Bwa-Bwa, as one of the pillars of our Cultural Identity!"

The Film will be screened on Thursday 28th, February at 6.30 pm and 8.00 pm at Alliance Francaise de La Dominique on Elmshall Road. Entrance Free. Donations accepted.