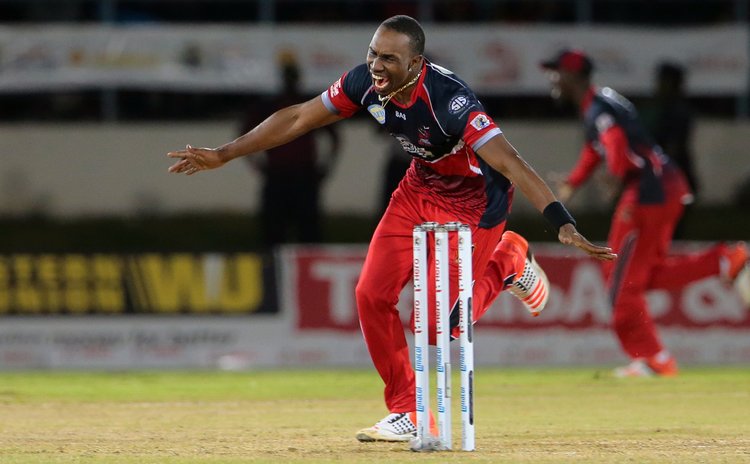 Sunday 19th July – Port of Spain, Trinidad: The Appleton Estate Jamaica Tallawahs qualified for the knockout stages of the Hero Caribbean Premier League despite defeat to the Trinidad and Tobago Red Steel at the Queen's Park Oval. A doughty 61 from Jacques Kallis and three important wickets from Samuel Badree set up the win for the home team, as the Tallawahs kept up with the required rate for most of their innings but they could not keep wickets in hand in the face of some excellent spin bowling from the Red Steel.

The Red Steel once again began in steady but unspectacular fashion as their leading run-scorer, Jacques Kallis, put together a vital innings at the top of the order. The only wicket to fall inside the first ten overs was that of William Perkins. He was adjudged LBW to Jerome Taylor when he was on five from 10 balls. The batsman was unlucky to go as the replay suggested that the ball would have missed the stumps.

Kallis was joined by the experienced Kamran Akmal, but the Pakistani wicket-keeper struggled to get going in the face of some probing bowling from the Tallawahs in the first half of the innings. He had made 14 off 20 deliveries when he was brilliantly run out by Mahela Jayawardene who returned to the side having been left out for the last game.

The departure of Akmal saw the arrival of Darren Bravo to the crease and there was a sense of expectation from a packed Queen's Park Oval following the left-hander's match winning exploits in his last two games. Unfortunately for the Trini-posse he could not produce another telling innings, dismissed for five when he spooned a catch to mid-off from a leading edge.

Kallis went on to record his first Hero CPL half century, getting to the landmark off 44 balls. The one chance that he gave during his innings was when he hit the ball high in the air off Taylor but a mix up between Andre Russell and Chris Gayle meant it landed safe. He made it to 61 as he carried his bat and anchored the Red Steel effort.

Dwayne Bravo was the man that did the most damage at the back end of the Red Steel innings as the captain made his way to 49 including three Hero Maximums. Bravo should have been dismissed when he was on 37 when Gayle dropped a very simple chance in the covers.

The Tallawahs did not need to win this game to make it through to the knockout stages, as long as they got to 96 they would maintain their superior net run rate over the St Lucia Zouks. It was clear that the skipper was not interested in sneaking over the line as Gayle took 26 runs from the first over from Samuel Badree.

Gayle could not make the most of that lightening start, falling to the bowling of Dwayne Bravo who extended his lead at the top of the Hero CPL wicket taking charts. The Tallawahs managed to keep up the rate once their captain departed, but they were losing wickets. First Jayawardene edged to slip off Sulieman Benn, then Chadwick Walton chipped a catch back to the same bowler.

Having gone for 26 runs in his first over Samuel Badree came back brilliantly. He claimed three wickets for nine runs in the space of 18 balls in his second spell. He dismissed Jermaine Blackwood, Daniel Vettori and Chris Lynn and would have claimed the wicket of Krishmar Santokie but for a drop from Kevon Cooper.

The Tallawahs got past the 96 run total that guaranteed progression but they could not claim victory. Some brilliant late order hitting from Andre Russell gave the visitors some hope, but he could not see his side to victory.

This defeat means the Tallawahs will finish fourth in the table and will face either this same opposition or the Guyana Amazon Warriors in the first semi-final on Thursday.

If the Red Steel win their last group game against the Amazon Warriors they will finish top of the table and qualify automatically for the final. If they lose they will finish in second or third depending on net run rate.

Whatever happens, the final four has been set – Barbados Tridents, Trinidad and Tobago Red Steel, Guyana Amazon Warriors and Jamaica Tallawahs will be in the knock out stages.