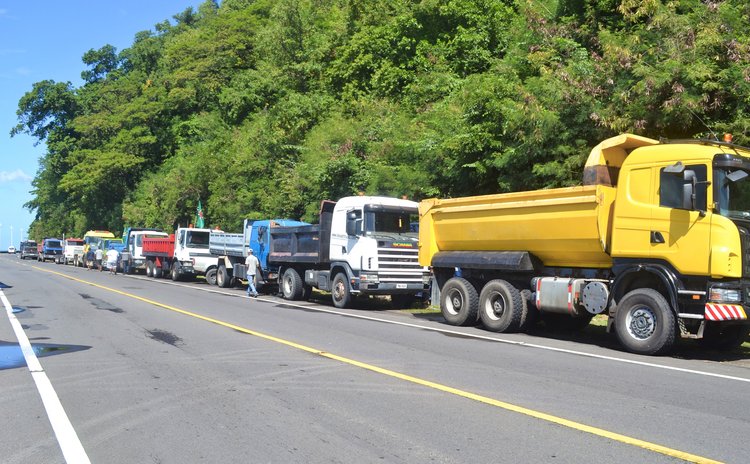 Trucks under the Canefield cliffs- sending a loud and clear message

We've seen it in the past-with bus drivers, lecturers at the Dominica State College (DSC), prison officers, and now truckers. Hours after some form of action is taken, prime minister Roosevelt Skerrit and his government give in to the demands of what the protestors have been requesting, for months- sometimes years.

With frustration at an all-time high, early last week, several truck owners lineup up their vehicles along the eastern side of the Canefield cliff for six hours, to send a clear message to the authorities that if their decades-long demands for the inclusion of locals in the construction of major projects were not met, then more severe actions would be taken.

Speaking during the "awareness gathering" president of the Tippers Truckers Association of Dominica (TTAD) Anton Laville said that while foreigners are "handed" projects, local truckers are left to struggle in their homeland.

"It is always a fight for us to get employed and I ask myself why is it that we as Dominicans we should be fighting to be employed in our own country when we have projects being undertaken and we have foreigners coming here walking through the airport and they are employed the very next day when we, the Dominican truckers, are willing to work at a reasonable rate," he said.

One example that the treasurer of TTAD, Everson Magloire, brought to light was the arrival of over a dozen of the Dominica Strong trucks following the passage of Hurricane Maria.

"If that could happen to us at that time, what's going to happen to us when they begin the airport?" the 20-year veteran trucker asked.

Magloire said banks and other lending institutions have lost confidence in the industry, not because of their unwillingness to pay, "but because of our inability to pay." A few hours following the protestor's request for the minister of public works and transportation, Cassani Laville, to "shake up the system" on their behalf, Laville agreed to meet with the truckers on November 18.

Though much was not heard from Laville's contribution at that meeting, like the "knight in shining armor," Prime Minister Roosevelt Skerrit issued a statement highlighting the several promises he proposed to the truckers.

At the meeting also joined by local contractors on November 18 at the Goodwill Parish Hall, the "sympathetic" prime minister announced the establishment of a committee to propose rates that are "fair and reasonable" for the services offered by those in the industry.

The committee will also be tasked with conducting an audit of available trucks and capacity in Dominica.

To address their concerns, sectoral as opposed to individually, Skerrit also suggested that a working committee under the chairmanship of the minister of public works and comprising representatives of the truckers' association, local contractors' association, or a grouping representative of two of the larger foreign-owned contracting firms on Dominica and an internationally recognized and respected agency, be established. He said his government would bear the cost of retaining the services of the members of that committee.

"I would want for this committee to commence deliberations as early as Monday the 22nd of November 2021 and to have a report containing firm recommendations presented to me as chairman of the cabinet by December 15 of this year," he said. "In this way, it is my hope that before Christmas, the government can and would be in a position to announce a new formula for determining the rate of pay of truckers in Dominica and we can also discuss whether we would like those rates to be legislated."

In an attempt to return "viability and profitability" to the trucking sector in Dominica, Skerrit has also requested that the truckers, as an association, submit to him, a proposal for consideration for a special regime of concessions to help improve their fleet of vehicles to offer something similar to what was done for those in the tourism sector.

Laville, the TTAD president, has since welcomed this development, telling The Sun that this offers "hope" for the local truckers.

But not all are optimistic about the PM's promises. According to a trucker who spoke to the Sun, "the prime minister is good at making promises but never keeping them. I believe he's doing all of that to keep the truckers calm, because he knows that, unlike the buses which require all 10 and 11, all we need is three or four trackers to block the streets, and the country shuts down."

Until then, the truckers say they will remain patient but vow to take "major action" if they do not start seeing results in the upcoming weeks.