Trump, Clinton hit each other hard with scandals in 2nd U.S. presidential debate 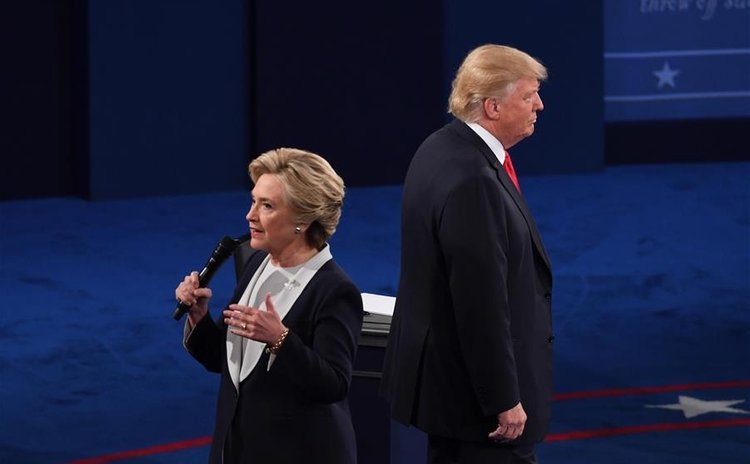 Hillary Clinton and Donald Trump at the second presidential debate

ST. LOUIS, United States, Oct. 9 (Xinhua) -- Candidates for U.S. president Donald Trump and Hillary Clinton went after each other relentlessly on Sunday night in the second presidential debate, hitting each other hard with scandals.

Indicative of the bad blood between them, they even did not shake hands at the outset of the debate, held at the Washington University in St. Louis, Missouri.

Early in the debate both candidates went on the attack in a bid to shut down and dominate their opponent, at times drawing cheers from the live audience.

Attempting to get the focus off the recent release of tapes showing Trump making outlandishly sexist remarks several years ago, Trump told Clinton she should "be ashamed" of herself, referring to her support for her husband and former president Bill Clinton, despite the latter's myriad sexual harassment scandals.

In response to her Republican rival, Clinton hit back, saying Trump was "not fit to be president" and that his campaign is "exploding."

Clinton further jabbed the brash billionaire, saying: "I think it's clear to anyone that the (tape) represents exactly who he is."

The tapes in question were from an interview several years back with radio shock jock Howard Stern, as well as off-camera moments years ago on the set of TV show Access Hollywood.

The tapes have caused shockwaves in U.S. media and outrage among Trump's critics, as they included Trump's remark that being famous allowed him to "kiss any woman," and lewd words about women.

Under widespread criticism and pressure, Trump apologized again for his lewd remarks, while denying he had sexually assaulted any woman.

The questions then turned to Clinton's email scandal, in which Clinton used a personal email instead of a secure, government-issued one while conducting business as secretary of state. Critics said that amounted to playing hard and fast with the nation's national security.

"You think it was Ok to delete 33,000 emails? I don't think so," Trump said, referring to Clinton's deletion of thousands of emails that critics said she didn't want anyone to see.

"For you to say that there's nothing wrong with deleting 33,000 emails, you should be ashamed of yourself," he said.

At one point about 20 minutes into the debate, Trump heckled Clinton by standing directly in back of her camera shot while she was trying to answer a serious policy-related question.

While Clinton spoke quite eloquently about Obama's health care overhaul, Trump's aim seemed to be to distract the audience from the issue in a bid to rattle the Democratic candidate.

On the immigration issue, Trump said Clinton "has really bad judgement", criticizing her policies at a time when drugs are pouring through the borders "at a record clip."

"She should never be president," Trump added.

Attacking what she deemed as Trump's divisive politics, Clinton said Trump's policies of deporting illegal immigrants have given anxiety to children.

Clinton suggested that foreign countries with a vendetta against the United States are trying to actively influence the elections in a bid to put Trump in charge.

"Maybe it's because he (wants to do business) in Moscow," Clinton suggested, referring to the alleged Russia's hacking activities against her campaign.

Clinton also blasted Trump for living in "an alternative reality" when talking about Trump's tax plan, which she said would have impact on large corporations and would raise taxes on middle class Americans.

"He would send us back into a recession with his tax plan," Clinton said.

Trump described the nuclear deal Washington made with Tehran as the "dumbest deal ever in the history of deal making."

Clinton said that her campaign was about "issues, not insults." But Trump shot back that Clinton has "tremendous hate in her heart."

When asked whether Trump has the discipline to be a good leader, Clinton answered a terse "no," adding that it is not only she who believes this, but even members of Trump's Republican party do so.

Near the end of the debate, an audience member asked the candidates to name one positive aspect of the other, with Clinton saying she respects Trump's children, adding that this says a lot about Trump himself.

Trump said "I will say this about Hillary -- she doesn't quit, she doesn't give up. She's a fighter."

Trump is believed to be desperate to mount a comeback in his campaign after losing his first debate and especially after the release of his lewd remarks about women. His campaign even invited several women accusers against Bill Clinton to this debate.

But it remains to be seen if Trump's combative performance in Sunday night's debate could help close his widening gap with Clinton in the polls.