Trump picks Ben Carson in charge of his key plan to restore US. inner cities 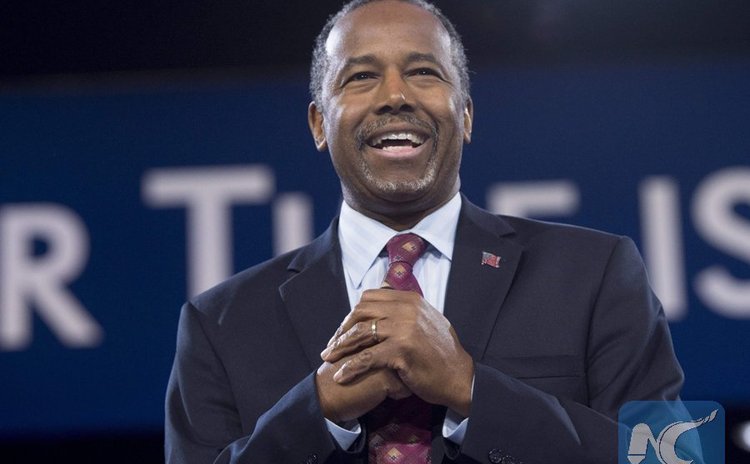 WASHINGTON, Dec. 5 (Xinhua) --- U.S. President-elect Donald Trump said on Monday that he will nominate retired neurosurgeon Dr. Ben Carson as the next secretary of the Department of Housing and Urban Development.

"I am thrilled to nominate Dr. Ben Carson as our next Secretary of the US Department of Housing and Urban Development," Trump said in a statement.

Carson, born in September, 1951 and growing out of poverty in Detroit to become a famed pediatric neurosurgeon, is the first African-American selected to serve in the president-elect's Cabinet.

"Ben Carson has a brilliant mind and is passionate about strengthening communities and families within those communities. We have talked at length about my urban renewal agenda and our message of economic revival, very much including our inner cities." said Trump.

Carson's new position, which needs to be confirmed by the Senate, oversees federal public housing programs and helps formulate policy on homelessness and housing discrimination.

"After serious discussions with the Trump transition team, I feel that I can make a significant contribution particularly to making our inner cities great for everyone," Carson wrote online earlier. "We have much work to do in strengthening every aspect of our nation and ensuring that both our physical infrastructure and our spiritual infrastructure is solid."

On the campaign trail, Trump promised to rebuild America's inner cities and restore "law and order" there.

Carson is one of the 17 Republican presidential candidates during the primaries. At the time, Trump derided Carson as "super low energy" and questioned Carson's temperament and qualifications for office. However, Carson endorsed Trump shortly after he dropped out of the race.