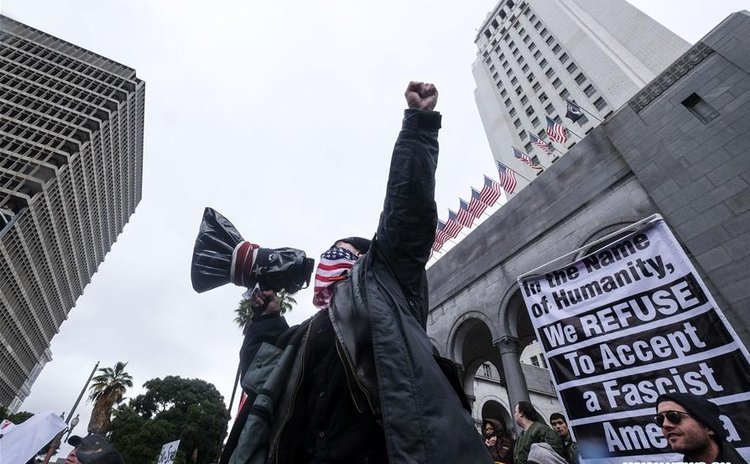 WASHINGTON, Jan. 22 (Xinhua) -- It seems surreal but in fact real: U.S. President Donald Trump spends his first full day in office on Saturday denying his feud with the CIA, ignoring the massive protests against him, and blasting the media over lessening his inaugural crowd.

The fights greatly overshadowed the new president's three diplomatic moves announced in the day: to eradicate "radical Islamic terrorism," to host British Prime Minister Theresa May as first visiting foreign leader on Thursday, and to meet with his Mexican counterpart Enrique Pena Nieto on Jan. 31.

At the CIA headquarters in Langley, Virginia, Trump described radical Islamic terrorism as "evil" unseen before and should be "eradicated just off the face of the Earth."

"We gonna end it. It's time. It's time right now to end it," Trump told hundreds of CIA staff, offering no details of his plan.

However, public attention was diverted when he quickly turned to attack the U.S. media over their reports about his inaugural crowd size and his feud with the intelligence community.

At the CIA headquarters, he scolded the U.S. media as "the most dishonest people" by reporting his feud with the intelligence agencies, although he previously slapped them in public for leaking reports that Russia may have "compromising materials" about him.

He further accused the media of lying about the number of people attending his inauguration on Friday. Earlier estimates put the crowd gathered for Trump's inauguration at about one-third the size of Obama's in 2009.

"I get up this morning and I turn on one of the networks and they show an empty field. I said wait a minute, I made a speech, I looked out, the field was, it looked like a million, a million and a half people. They showed a field where there were practically nobody standing there," he told the CIA staff.

"So, we caught" the media, Trump said, "and we caught them in beauty. And I think they're going to pay a big price."

Hours later, White House spokesman Sean Spicer used his first official appearance in the press briefing room to criticize the U.S. media for the coverage of Trump's inauguration crowd, blasting their reports on the crowd size as "shameful and wrong."

"This was the largest audience to ever witness an inauguration, both in person and around the globe," Spicer said, despite photos and video showing much fewer people assemble on the National Mall for Trump's inauguration than for Obama's in 2009.

Photos comparing the two inaugurations side-by-side on social media were "intentionally framed in a way to minimize support" for the new president, said Spicer. He did not take questions from reporters.

Both Trump and his spokesman have so far remained silent to the widespread anti-Trump protests held across the United States and parts of the world on Saturday.

Large turnouts were reported in Washington, Boston, New York, Chicago and Los Angeles in a powerful display of rejection of Trump's agenda, and of what the organizers said his insulting attitudes toward women. Similar marches were held in Paris, London, Sydney and some other major cities in the West.

More than 2.5 million Americans joined the protests across the country, reported TheHill news daily, which cited a review of official and unofficial estimates from U.S. largest cities.

In New York, Bridget Mills, a 41-year-old protester, told Xinhua: "I hope it sends a message (to Trump) that we're listening, we are paying attention to if he cares morally about people's civil rights and America's standing in the world."

Elizabeth Moore, a protester from New Haven, Connecticut, said: "I am very, very concerned about the next four years. I think we have a lot of rights that are going to be trampled on under the Trump administration."

"His bigotry and his views toward women are extremely troubling to me," she added.