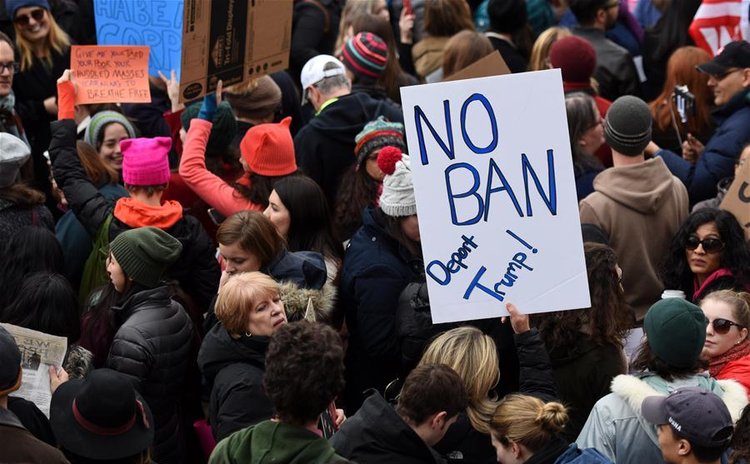 Demonstrators participate in a protest against U.S. President Donald Trump's executive order in front of the White House in Washington D.C., the United States, on Jan. 29, 2017

WASHINGTON/NEW YORK, Jan. 29 (Xinhua) -- Thousands of protesters rallied in front of the White House on Sunday while demonstrations continued across more than 30 American airports after U.S. President Donald Trump signed an executive order temporarily barring all refugees and seven Mideast and North African countries' citizens from entry into the U.S..

Hundreds of protesters gathered Sunday at John F. Kennedy International Airport in New York to demonstrate against the ban.

The protesters, hoisting signs like "Bridges, not wall" "Dump Trump," chanted loudly "No hate, no fear, immigrants are welcome here," and "Build a wall, we'll tear it down" in front of JFK's Terminal 4.

Steve Golden is one of a group of volunteer attorneys that are trying to help those held up by custom officials at JFK since Saturday. They did not sleep over the past 24 hours.

He escorted an unidentified lady who was just freed by the custom to her relatives' vehicle.

"Most of these people are green card holders, some are people with visas, lots of people have families, homes and pets here, they are simply being detained because of the new process. I believe the executive was unconstitutional." Golden told Xinhua.

Janie Lynch, a teacher from Flushing, Queens, said, "we are here because we are all brother and sisters, and the U.S. is supposed to be open to everybody, whether you are tired, are poor, are yearning for free." "I just cannot let this happen, injustice will end to be injustice to everybody, we simply cannot sit back, we cannot remain neutral on a moving train, it's happening."

In the city's downtown battery park, hundreds of protesters also braved the winter chill to demonstrate against the president's executive order.

The Lafayette Square before the White House was packed by protesters against Trump's ban from noontime as more demonstrators were still arriving, witnesses said.

They wielded poster boards bearing messages such as "Ban Trump" "Refugees Welcome" and chanted "No hate! No fear! Refugees are welcome here!"

Protests are also scheduled throughout the day in Philadelphia, Atlanta, Los Angeles, Seattle and Chicago, said a CNN report.

In Boston's Copley Square, thousands of people also gathered to protest the immigration ban, according to a report from the USA Today.

Earlier on Sunday, White House counselor Kellyanne Conway said the international travel disruptions in the wake of the ban was "a small price to pay" for greater security of the United States.

A federal judge in New York on Saturday night granted an emergency stay temporarily halting the removal of people who, though with previously approved refugee applications or with valid visas, had ben detained following Trump's refugee and immigration order.

Under the order, refugees from all over the world will be suspended U.S. entry for 120 days while all immigration from so-called "countries with terrorism concerns" will be suspended for 90 days. Countries included in the ban are Iraq, Syria, Iran, Sudan, Libya, Somalia and Yemen.