Turkey's happy over release of hostages held by IS 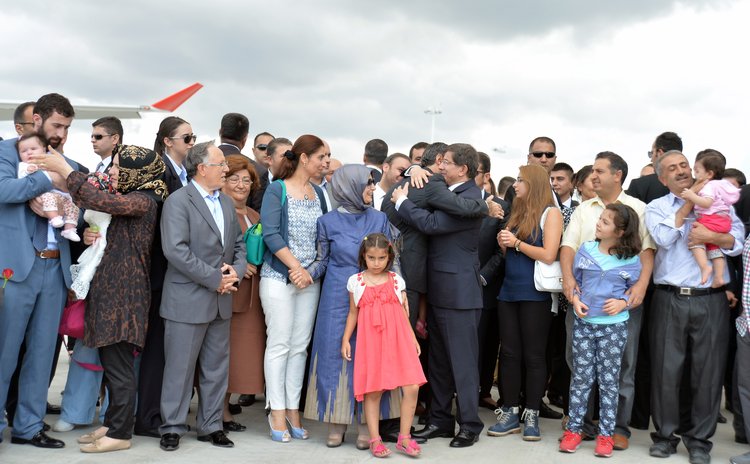 ANKARA, Sept. 20 (Xinhua/Sun) -- A total of 49 hostages including 46 Turkish citizens and three Iraqi citizens held by Islamic State (IS) militants in northern Iraq were released and brought back early Saturday morning to Sanliurfa province in southern Turkey, while conflicting details came to the release.

Prime Minister Ahmet Davutoglu, who shortened his trip to Azerbaijan, met with the hostages in Sanliurfa, without noting any rescue operation but simply saying that the intelligence agency has intensified early Saturday its contacts with hostages and they were brought to Turkey around 5:00 a.m. local time.

However, Samil Tayyar, a deputy of the ruling Justice and Development Party, claimed that the U.S. Central Intelligence Agency (CIA) secured the release of the Turkish hostages.

While, Turkish TVs quoted an anonymous intelligence source from MIT as saying that Turkish intelligence was alone involved in rescuing the hostages, stressing that no foreign intelligence operations were involved.

NTV news channel said the location of the hostages was changed eight times, quoting the source as reporting that no ransom was paid and no agreement was made for a swap of hostages.

A news portal Takva, known to be close to IS, reported that hostages were freed following a negotiation between the IS and Turkey, confirming that no ransom money was paid.

The report claimed that the reason for the release was Turkey's commitment not to participate in the U.S.-led coalition against the IS.

Early this week, Turkey refrained from becoming part of a group of countries that pledged support to the central government of Baghdad in its fight against the threat of IS during an international conference on Iraq's peace and security conference in Paris.

Last week, Ankara also refused to sign a communique that supports an international campaign against IS in Saudi Arabia's Jeddah where the United States and Arab allies pledged to cooperate to fight against IS.

Turkey said its hands are tied due to the 46 Turkish citizens and three Iraqi citizens who were kidnapped by IS in Turkish consulate general in Mosul in June.

The IS militants have killed two U.S. journalists and one British aid worker, prompting concerns in Turkey that the similar fate may meet Turkish hostages as well.

The hostages, including Turkish Consul General Ozturk Yilmaz, some diplomats' children and special forces soldiers, have already been brought to the Turkish capital of Ankara.

There was a joy in Turkey and sigh of relief that Turkish citizens were let go unharmed. Davutoglu called the day as the day of celebrations across the nation, saying captive citizens had been in the thoughts and prayers of every Turkish citizen for the last three months.