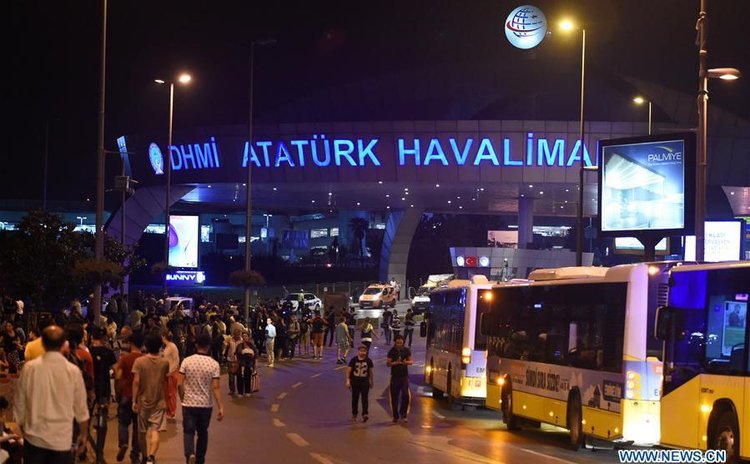 ISTANBUL, June 29 (Xinhua) -- Turkey announced a day of national mourning on Wednesday for the 41 lives lost the night before during deadly suicide bombing attacks on Istanbul's Ataturk Airport, one of the busiest in Europe.

Across the country flags are flowing at half-mast for the dead, among them 12 foreign nationals from Saudi Arabia, Iraq, Tunisia, Iran, Ukraine, Jordan and Uzbekistan.

A statement released by the Istanbul governor's office also said that of the 239 wounded in the attacks, 109 have been discharged from hospital.

"Everyone is shocked over such a big terror incident," said German journalist Stephen Richter, who arrived in Istanbul on Wednesday to cover the tragedy.

Hande Firat, CNNTurk's representative in Ankara, said on a live broadcast that Ataturk Airport was listed as a potential target in the letter.

As of now, no group has claimed responsibility for the attacks.

Turkish Prime Minister Binali Yildirim blamed the IS for the atrocity, though he said efforts were continuing to identify the perpetrators.

On Wednesday afternoon, the counterterrorism teams launched an operation against two addresses in Istanbul over the attacks and seized coded organizational documents, the Sabah daily reported.

Meanwhile, the public prosecutor's office in Istanbul's district of Bakirkoy revealed that three suicide bombers arrived at Ataturk Airport by the same taxi.

Two started shooting at the crowd with a Kalashnikov and a Glock rifle after forcing through the X-ray security check point at the entrance of the international terminal, while the third one went upstairs, the Hurriyet daily said.

Before they entered, they had clashes with security officials and got wounded, the daily added.

The trio detonated their explosives, and the explosions left deep scars at the airport, most visibly three large areas of receded ceiling and broken glass walls both inside and outside the arrivals section of the international terminal.

Airport employees on the morning shift were on the scene examining the damages. Some lost their colleagues and declined to make comments to reporters.

The airport resumed business on Wednesday morning following hours of mess and chaos and the suspension of all flights.