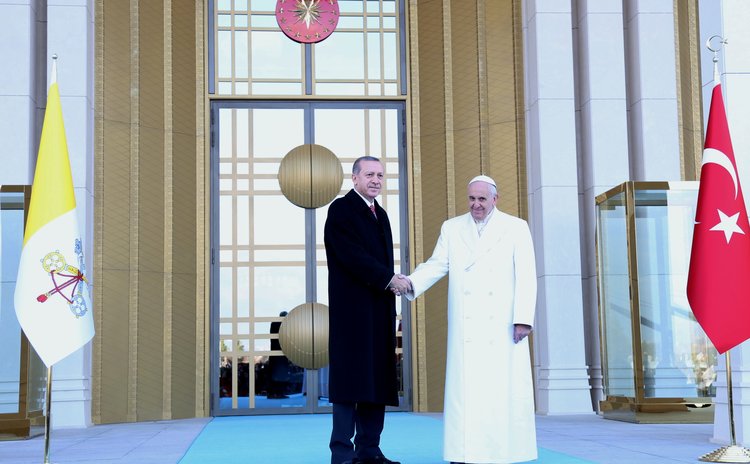 ANKARA, Nov. 28 (Xinhua/Sun) -- The Turkish President Recep Tayyip Erdogan on Friday voiced concern over "rapidly rising racism, discrimination and Islamophobia in the Western World," and called on to work together against the threats weighing in the world.

Speaking at a joint press conference in Ankara with visiting Pope Francis, Erdogan said the Pope's visit to Turkey would remain positive influence on Muslim World.

"I believe Pope's messages today will reach not only to people of Turkey but to both Islam and Christian world," the president said.

Yet, Erdogan criticized Western World of discrimination against Muslims.

"Unfortunately, racism, discrimination and Islamophobia are rapidly increasing in the West," he stated.

Terrorist organizations such as al Qaida, Islamic State (IS) and Boko Haram are fruits of years-long wrongs of policies, the Turkish president said. "Desperate millions, who feel abandoned, become exploited by terror groups," he noted.

"Muslims are offended with attempts of identifying Islam with terrorism," Erdogan said.

He called on the international community for alliance of civilizations and for cooperation against racism and hate crimes.

The Turkish president also criticized stance of international community on war in Syria and Palestine.

"There is state terror in Syria and Gaza right now but international community remains silent," he said.

Erdogan said both Pope and he were sharing same views on issues of "terrorism and dominance of money." Pope Francis, for his part, said that Anatolia was a pilgrimage site for Christians around the world.

Muslims, Jews, Christians must have same rights, he said, noting that Freedom of religion and freedom of expression should be provided.

Pope stressed that inter faith and intercultural dialogue would contribute to peace.

"We have to confront all forms of extremism, fundamentalism and terrorism," the Pope noted.

Francis appraised Turkey's efforts for hosting many Syrian refugees, saying "Turkey accepted many refugees, receiving them is a moral necessity."

The three-day tour is the fourth visit by a pope to Muslim-majority Turkey.

Although some 80 million citizens of Turkey are Muslims, there are around 120,000 Christians in the country, once the centre of the Orthodox Christian world.