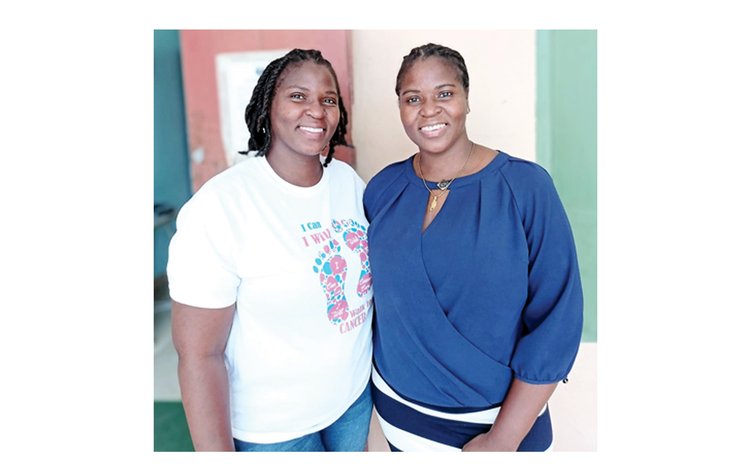 Some twins are content in sharing just a birthday, but a pair of identical twins from Kingshill decided to take it a step further by sharing the same wedding day, and as luck would have it, the sisters also have the same initials.

In our ongoing feature of "Twins on Twins", THE SUN met with Mistral Juliette Bernabe-Riviere and Martine Julie-Ann Bernabe-Roberts who informed us that all their lives they have shared major accomplishments together, hence, "our wedding day should be no different."

"We got engaged days apart so therefore we started planning our wedding together and our husbands had no issue with the double wedding," Mistral stated.

Following their unions, the couples moved in together and shared the same home for some time, until they separated.

Mistral, the firstborn, a teacher by profession now lives in Stock Farm whilst Martine who is pursuing a career in the medical field resides in Kingshill, a split the sisters said they have adjusted to over years.

"We both have spouses of our own and our own family so we had no choice in that regard. We enjoyed living together but there came a time when we had to separate but we talk and see each other almost every day, so it's like we're not really apart," Martine said.

According to the pair, during their 41-year connection, they are used to tackling each other's sufferings and believe the bond is a special aspect of their unique relationship.

Similar to the Joseph twin who was earlier featured, Mistral and Martine, revealed to THE SUN that they too carried the other's pregnancy illness during the nine months.

Martine recollected an instance when her sister's pregnancy almost cost her her job.

"She [Mistral] was pregnant and I started to feel ill. Every day I would have cramping, vomiting, and pains and at the time I was a teacher at a Methodist. One day the Principal told me because I was unmarried I could not be pregnant and still employed at the school, and it was the other staff members who had to explain the situation to her," she disclosed.

Martine said this occurrence did not happen once but throughout her sister's three pregnancies. However, Mistral on the other hand did not suffer a similar fate during Martine's pregnancies though she stated that she felt slightly ill at some point.

Strangely enough, the sisters both lost a side of a twin during their first pregnancy, something they are still baffled by.

The look-alikes say their similar appearance has resulted in them, all their lives, being mistaken, by their parents, children, friends, and even their husbands.

Mistral jokingly told, "There was a time when we were living together, her husband came home and he wanted to greet his wife with a kiss as normal and he mistook me for her. Here he is chasing me around the house for a kiss and wondering why his wife doesn't want to kiss him not knowing I wasn't his wife. My husband as well has made the same mistake."

The pair insist they have accepted the fact that they will always be mistaken hence they have given up attempts to differentiate themselves from others.

"We reached a point where if someone calls me for her I will just go with the flow," Martine declared whilst Mistral added: "Sometimes trying to explain to people that I'm not the one they know is difficult because some find it hard to believe, so if someone calls me Mistral I'll answer."

Though they enthusiastically told of the many advantages of their twin-ship, the sisters said one of the major disadvantages which they were victims of is comparison, something which Martine said affected her for a number of years.

"All our lives we have been compared to each other, academically, in looks and so many other ways so all of this started to take a toll on me and I went through a period in my life where I felt like the weaker of the two and was constantly feeling like I had to catch up to my sister but in hindsight, I couldn't," she said.

Following a period of self-reflection, Martine decided to chart her own course which she said further strengthened her and her sister's relationship.

Through it all, they hold each other dear to their heart as Martine expressed, "I cannot imagine myself without her," and Mistral adds, "when all else fails, I can always count on her."