Twins on the Court

Jump Ball No. XXXIV.(Segment B). By Arlington James 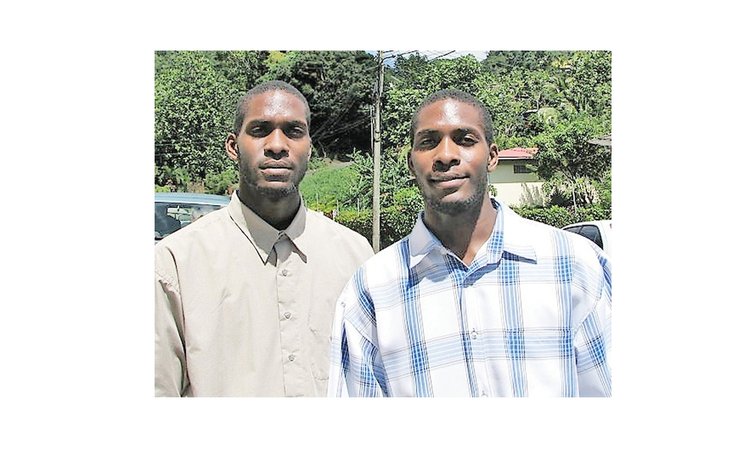 Segment A of "Twins on The Court" presented the Etiennes and the Hendersons.

The article concludes below.

SHANE & SHAUN REID, 6ft 5in tall, identical twins from Laudat, belong to an extended family that includes four sets of twins! The Reids are currently in their early thirties and both are right-handed.

Shane has only played basketball with Laudat, in the 2011 Trafalgar Basketball League.

In his youth, Shane sustained an injury on the Wotten Waven basketball court that severely hampered his development in the sport. As a result he has never played in the national league.

Nevertheless, Shane boasts of being able to keep a basketball spinning on his finger for 2 to 3 minutes.

Shaun, on the other hand, is the more distinguished basketballer of the Reid twins. He played with Goodwill Secondary School in the Sports Division Under-20 Schools' League and represented Dominica in basketball at the Windward Islands Schools Games in 2003 and 2004.

He also played in Trafalgar's Basketball League with Wotten Waven, followed by Stafford Morancie Eagles, then with Laudat. More recently, he played with Blazers in the 2014-2015 Roseau Valley Basketball League.

Shaun began playing in DABA's national league in 2003, in the 2nd LMD with Stafford Morancie Eagles. Soon thereafter, in that same season he stepped up to Blazers in the Premier Division, assisting the Massacre-based team win some of their championships since then. For the 2013 season, he temporarily moved across to Prowlers of Trafalgar, scoring a hefty 27 pts in a Play-Off Finals match that year.

Apart from playing locally, Shaun also toured with Blazers for tournaments in Tortola, St. Kitts, Guadeloupe and St. Maarten, where he helped his team win two of the four tournaments in which he participated thus far.

Interestingly, Shane & Shaun only played together competitively with Laudat, in Trafalgar's 2011 Basketball League. That year Laudat had mesmerisingly included two set of twins: the Reids, and another pair of twins of Dominican parentage, and who were visiting from the USA.

Steve & Steven Williams are right-handed, identical twins from Roseau, and were well-known on the Windsor Park Basketball Court during the 1980s. They played on separate teams in the national league, but both loved shooting long shots, from before the introduction of the Three-Pointer arc in 1984.

Steve first played with Police Sports Club, followed by Flames senior division). He mostly played in the Forward position, but occasionally was a ball-handler.

Currently, Steve is a Corporal in the Dominica Police Force while Steven serves as a Messenger in the Public Service. They attended the Roseau Boys' School and are currently in their mid-fifties.

Steve is also a calypsonian, competing under the stage name, 'Triumph'. Furthermore, he is a Cadence artiste and, like the Henderson twins, was featured in "Arts... Basketball… Culture…"

Davis "DJ" Joseph: In addition to the four pairs of twins who played on the local scene, readers of Jump Ball who played basketball in the national league in the 1980s and 1990s may remember Davis "DJ" Joseph. Many did not know that DJ is one "side" of a pair of mixed-twins; he is about 50.

So, there you had them. Twins who played basketball in Dominica thus far, at Secondary School Inter-House, Schools, "Inter-Schools" Tournament, "Off-Season" and the National Leagues. The line-up includes 4 pairs of identical twins and the male "side" of mixed-twins.

The "sides" of three of those four pairs of twins played on the same teams (Etiennes: South-East Suns, Clouds; Hendersons: Pros, 76ers, Rammers; and Reids: Laudat).

Interestingly, when Laudat participated in Trafalgar's 2011 Basketball League they made history in Dominica's basketball by fielding two sets of twins. Players and fans alike must have been thrilled, if not confused, by all of those "jimos" playing simultaneously on the court.

Incidentally, for the record, basketball is not the only locally-played sport that involved - or involves – twins playing together. In football, identical twins Letecia and Lizanne Roach of Grand Bay play on Harlem Women's Football Team. These ladies represented Dominica on the 2015 Women's Under-17 Football Team.

So, the next time that you encounter a pair of twins, think how they would perform, playing in a basketball match.