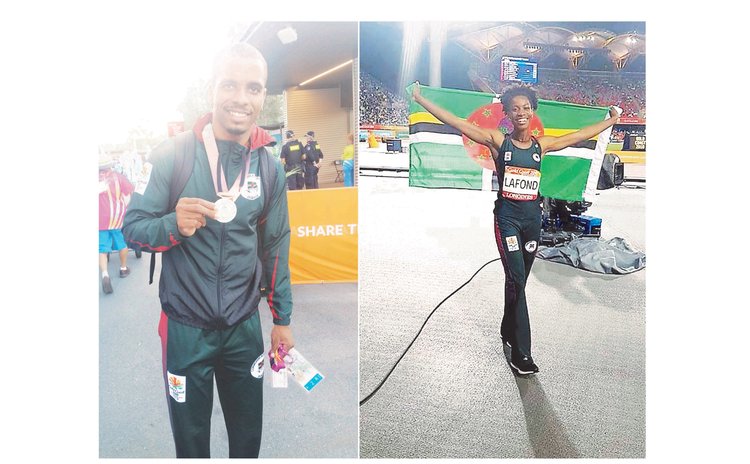 Garcia, left and Lafond at the Commonwealth Games

Dominica ended the XXI Commonwealth Games, held from April 4 to April 15 at the Gold Coast in Australia, with one silver and one bronze medal.

On Saturday April 14th Yordanys Duranona Garcia won Dominica's second medal at the 2018 games, missing out on the gold medal by just two centimeters to Troy Doris of Guyana.

Doris, however, countered with a season best of 18.68 metres on his second jump with a wind of +0.5.

He skipped the 4th and 5th round of jumps in an attempt to gain some time to recover from a niggling ankle injury. However, Garcia couldn't muster the strength on the final jump, and pulled up lame on his 6th and final attempt. So, Dominica missed out on a gold medal by the slimmest of margins.

Earlier, on Tuesday 10th April, Dominica claimed its first medal at the Games when Thea Lafond set history by becoming the first Dominican to secure a medal at the Commonwealth Games.

Lafond secured a bronze in the women's triple jump event with a leap of 13.92 metres. She started the event with a bang, jumping 13.82 meters, then jumped 13.52 in her second leap, before jumping 13.92 in her third jump. She then leapt 13.62 on attempt number 4 before fouling on her fifth attempt.

She landed 13.62 meters on her final attempt.

Lafond who attended the University of Maryland is a teacher, coach and athlete in the United States.

She also represented Dominica at the Olympic Games in 2016. More than 4,500 athletes from 71 nations attended the XXI Commonwealth Games that ended Sunday. The athletes competed for 275 gold medals over the 11 days of competition.

Dominica had its largest ever contingent at the games: 13 athletes- 10 in track and field, two boxers and one cyclist.

The other performances included: female long jumper Mariah Toussaint who failed to move on to the next round; Valerian Spicer was knocked out of Games following controversial split decision to an 18 year-old fighter from Scotland; national shot put record-holder, Dillon Simon, ended his run at the shot put event in the 2018 Commonwealth Games when he failed to advance to the round of the last eight throwers; 200 metre specialist Mitchell Davis was plagued by a knee injury during his 200 metre heat and ran what he described as the worst race of his career in the 6th heat of the Men's 200 meters; the injury bug struck promising long jumper Bavon Sylvain who was unable to complete the long jump event after pulling up with a groin injury on his second attempt; long jumper David Registe missed out on a spot in the next round; long distance runner David Coriette also found the going tough in the men's 800 metre event; Derick St Jean eclipsed his personal best time of 48.11 seconds in the men's 400 metres to run 47.27 seconds but he failed to make it to the semifinal round of the competition.