Two in one day

Dominica proves again that it is: "Centenarian Country" 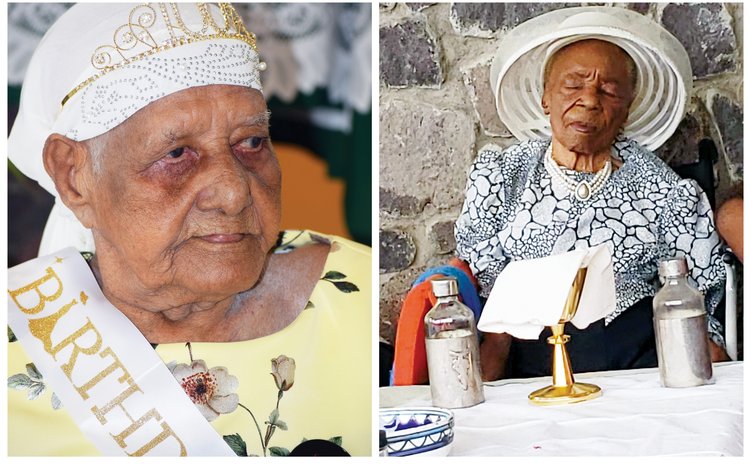 In June 2020, there were 25 centenarians in Dominica, according the Dominica Council on Ageing (DCOA).

Dominica has had more than its share of centenarians and almost everyone is asking the critical question: why?

"It could be the food. Possibly the terrain. Maybe the water. It must be the fresh air," wrote Jose Allison D. Kentish in 2006.

"This Caribbean island has the highest number of centenarians in the world, and it was from here that the oldest person ever hailed," wrote Mark Porter of the UK's Daily Mail. He was writing about Ma Pampo of Portsmouth who died in 2003 at the age of 128. When Pampo was alive, three of her neighbours were also centenarians. Her next-door neighbour was aged 118.

Here are brief profiles of our newest centenarians:

Alvin Lewis, Ma Mona's son, said she was a hard- working woman and that could have contributed to her longevity.

"Ma Mona used to be working with Howell Shillingford from Batalie to Macouchrie and afterwards walk to her garden some two miles up", Lewis said in a telephone conversation. "She ate her natural foods; her potato she planted; her banana she planted; cockoy, yam, plantain. Sometimes she would make little dumplings and cook that with pig snout and beans." Lewis said Ma Mano's diet and hard work has kept her healthy.

"Ma Mona is not sick at all," Lewis said. "She has no pain, nothing; it's just old age-no hypertension, no diabetes."

How many more years she will probably live?

Gath Lewis, Ma Mona's grandson adds that his grandma survived on the love that she gave and that she received.

"She was always warm-hearted-always," he said. "All her children, all her grandchildren-everybody- that knew her would love her."

He added: "She always had this advice- spend less time fighting and more time loving."

At 100 years old "Aunty Ann", according to granddaughter Gananda Laurent, eats well, sleeps well and all her senses are fully functional.

"The only thing is that her knees troubling her, so she cannot walk around like before but apart from that she has no other thing, like diabetes," said Laurent.

But Laviniere has had a tough life having started working at age 15 because her parents, who had nine other children, need help. Aunty Ann worked predominantly as a maid. And based on her grandmother recollection, Laurent said the centenarian's diet was mainly based on milk and plant protein.

At her birthday party on Saturday, Aunty Ann said if her friends and relatives want to live as long as she has lived, "you have to take care of yourself and make sure you eat properly."