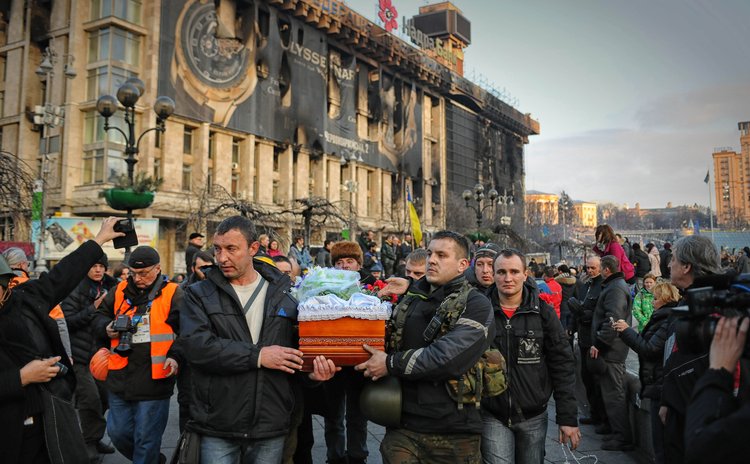 Protesters carry a coffin in the capital

KIEV, Feb. 24 (Xinhua/Sun) -- Following fast-moving days of political upheaval, Ukraine has entered into an uncharted water, challenged by a power vacuum left by the flight of President Viktor Yanukovych and the dire economic situation.

Though Ukraine's parliament has moved swiftly after the ouster of Vanukovych Saturday -- empowering new speaker, Oleksandr Turchynov, to perform the duties of the president until a election is held in May -- ominous signs emerged on both political and economic fronts.

For ordinary Ukrainians, too many old faces in the provisional government, mostly from the opposition Fatherland party of Yulia Tymoshenko, raised fears that this time round, the deadly street uprising would just be a repeat of history, ending up in the popular disappointment of the government, just as the case with the 2004 Orange Revolution led by Tymoshenko.

Among the strong contenders for presidency include two top allies of Tymoshenko -- Arseniy Yatsenyuk, a leader of the Fatherland, and the newly installed speaker Turchynov. This has also strengthened the bitter feeling that the political upheaval might in the end work only to the opposition's advantage rather than the Ukrainian people.

As parliament continued its efforts to rebuild the country, authorities on Monday issued an arrest warrant of Yanukovych, whose whereabouts remain unknown, on charges of mass murder in the killings of dozens of anti-government protesters last week.

"We have opened a criminal case on the mass murder of civilians. Yanukovych and several other officials are on the wanted list," said interim Interior Minister Arsen Avakov, adding that the president is believed to be in the pro-Russia Crimean peninsula in the south of the country, the strong support base of Yanukovych.

Yanukovych's flee capped three months of protests triggered by his rejection of a Ukraine-EU trade pact in favor of closer ties with Russia last November. More than 80 people have been killed and hundreds of others injured in the bloodiest violence since the country gained independence in 1991.

Meanwhile, scores of high-ranking officials in Yanukovych's government are also likely to be on the list of the judicial pursuit.

"We're going to announce a suspicion to about 50 persons, including high-ranking officials, for organizing the massacres," said Oleh Makhnytsky Monday, who was appointed as the country's acting prosecutor general in the same day. Though he did not disclose the suspects' names, the members of the former government are reportedly to be among them.

#### A nation on the brink of bankruptcy

The political uncertainty has cost Ukraine economically: the country is said to be in dire financial straits, facing possible default.

Turchynov said Monday that his country needs at least 213 million dollars to hold the election campaign scheduled for May. The money was a large sum for Ukraine, said Yatsenyuk. "The treasury was plundered; the state is on the edge of bankruptcy."

Ukraine, which has to pay 17.4 billion dollars of its foreign debt this year, turned to the international community for help. It has proposed to hold an international donor conference with the participation of the European Union, the United States, Poland, the International Monetary Fund (IMF), and other countries and international financial institutions to allocate funds for Ukraine 's reforms and modernization.

Ukraine needs around 35 billion dollars in aid to improve its economy, the country's Finance Ministry said.

The EU foreign policy chief Catherine Ashton, who is on a working visit to Kiev, capital of Ukraine, said the 28-member block is ready to support Ukraine.

"We are ready to support Ukraine and to show the other countries that your state not only solves the problems of the past but looks to the future," Ashton said during a meeting with Turchynov.

Meanwhile, Russia, the biggest Ukraine's trade partner, questioned the legitimacy of Ukraine's new authorities and said that gas contracts between the two countries had time limits and Moscow could reconsider them on consultations with Kiev.

Gas price means a lot to the country's budget. When Moscow agreed to cut the price of its gas supplies to Ukraine by a third in December, Kiev said that it expected to save up to 7 billion dollars in annual cost from the deal