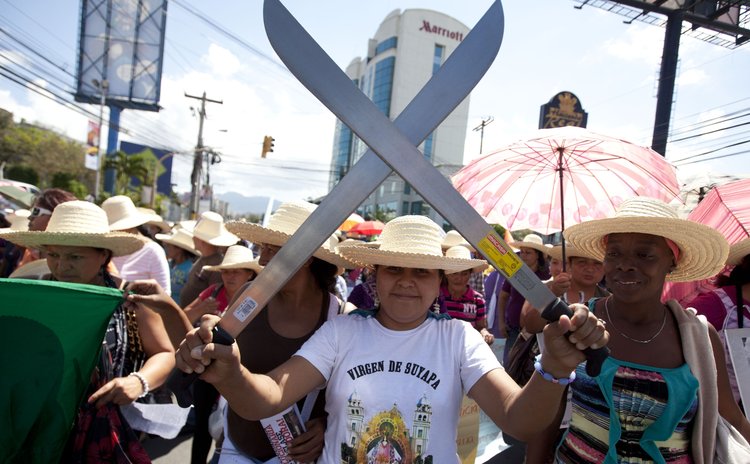 TEGUCIGALPA, March 7, 2014 (Xinhua) -- Honduran Women attend a demonstration on the occasion of the International Women's Day in front of the Presidential House in Tegucigalpa, Honduras, on March 7, 2

UNITED NATIONS, March 7 (Xinhua/Sun) -- On the eve of International Women's Day, the United Nations on Friday launched the "He for She " campaign urging men to stand up for the rights of their mothers, sisters and daughters, while top UN officials stressed that human rights for girls and women are not a dream but a duty of all.

"Throughout the world, discrimination against women and girls is rampant, and in some cases getting worse. But we also know equality for women is progress for all," UN chief Ban Ki-moon said, highlighting the theme of this year's observation of the Day celebrated worldwide on March 8 annually.

He appealed to men and boys of the world: join us because " where men and women have equal rights, societies prosper."

With this in mind, the United Nations launched the "He for She" campaign, urging men and boys to take a stand. The launch features video clips of prominent men urging support for gender equality, including the UN secretary-general, Nobel Laureate Desmond Tutu and actor Antonio Banderas.

"I commend those of you (men and boys) who have spoken out and stand with women and girls, as you know women hold half of the sky. We call on all men also, stand up and hold up half of their part of the sky," Phumzile Mlambo-Ngcuka, UN under-secretary-general and executive director of UN Women, told participants.

Next year will mark 20th anniversary of the landmark World Conference on Women. The Beijing Declaration and the Platform for Action, adopted unanimously by 189 countries, is considered the key global policy document on gender equality, addressing critical areas such as women and poverty, violence against women and the human rights of women.

Countries are also working toward the adoption of global development agenda beyond 2015.

John Ashe, president of the UN General Assembly, said, "As we begin crafting a new development agenda for the post-2015 era, we can celebrate the world's recognition that gender equality and women's empowerment must be at the heart of sustainable development."

Women and girls take their rightful places in the new development paradigm not only because it is critical for development, "but because equality is their right," he said, stressing the importance of addressing root causes of gender inequality.

The UN chief, who returned to New York earlier Friday from Sierra Leone, met Thursday in London with Fahma Mohammad, part of the Integrate Bristol campaign against female genital mutilation. Ban had pledged to support her efforts.

"Women's rights, women's empowerment, and gender equality are essential components of this conversation, including reproductive rights and ending violence against women," Ban said.