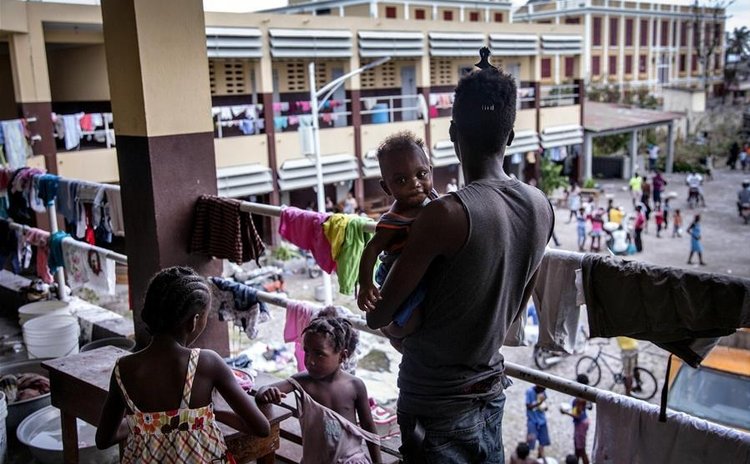 Image provided by the United Nations Children's Fund (UNICEF) shows people seeking refuge at a school after losing their houses in Hurricane Matthew, in Les Cayes, Haiti, on Oct. 9, 2016

UNITED NATIONS, Oct. 10 (Xinhua) -- UN Secretary-General Ban Ki-moon on Monday announced the launch of a nearly 120-million-U.S. dollar appeal to fund United Nations aid activities in the aftermath of Hurricane Matthew in Haiti, where more than 1,000 people were reportedly killed.

Haiti, after the hurricane attack on Saturday, saw the rising death toll coupled with the start of the rainy season has prompted the UN Children's Fund (UNICEF) to sound the alarm on the threat of waterborne diseases to children living in the worst-affected areas.

Ban told reporters here that the numbers of those impacted and the needs are growing as more affected areas are reached. Moreover, tensions are already mounting as people await help.

"A massive response is required," he said, adding that UN teams are working with local officials to assess needs.

Earlier Monday, the United Nations in Geneva launched a 120-million-U.S. dollar flash appeal covering the UN system's needs for the next three months, the secretary-general announced, recalling that this past Friday, the UN Central Emergency Response Fund (CERF) allocated five million U.S. dollars in emergency funds to kick-start assistance in the wake of the deadly storm, following the release earlier in the week of a loan of eight million dollars to the UN Children's Fund (UNICEF) to scale up response to the worsening cholera epidemic in Haiti.

"Hundreds have died. At least 1.4 million people need assistance at this time. Some towns and villages have been almost wiped off the map," Ban said while addressing the reporters at UN Headquarters in New York. "Crops and food reserves have been destroyed. At least 300 schools have been damaged."

He expressed his deepest condolences and sympathies to those affected by the hurricane.

The so-called Flash Appeal, launched by the UN on behalf of the international humanitarian community, requests 119,850 U.S. dollars to respond to "the most urgent needs" of people impacted by the storm, which made landfall in Haiti on Oct. 4 and went on to leave a swath of devastation throughout the Caribbean and the Southeastern part of the United States.

According to the UN Office for the Coordination of Humanitarian Affairs (OCHA), the appeal targets vulnerable groups in identified priority sectors, and it takes into account the national-level capacities and those of humanitarian partners on the ground.

Over the next week, partners will develop individual projects in support of sector activities and financial requirements identified in this appeal, adapting the response to the most up-to-date assessment results.