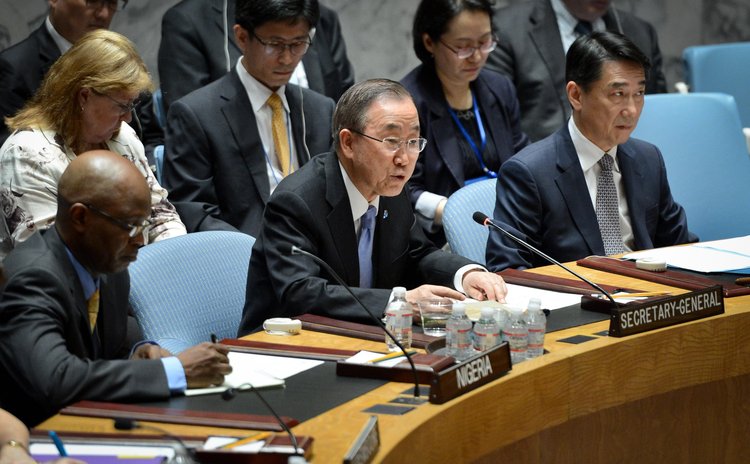 UNITED NATIONS, May 12 (Xinhua/Sun) -- UN Secretary-General Ban Ki- moon on Monday described the current conflict in South Sudan as " an entirely man-made calamity" and called for an immediate end to the fighting in the world's youngest country.

The secretary-general made the appeal as he was briefing the UN Security Council on the current situation in South Sudan. "This is an entirely man-made calamity and it needs the engagement of all actors to change course."

The UN Mission in South Sudan (UNMISS) reported incidents of fighting between Sudan People's Liberation Army (SPLA) and Opposition forces in parts of Unity and Upper Nile State over the weekend, in violation of the agreement signed by President Salva Kiir Mayardit and opposition leader Riek Machar, the former vice president, Friday in Addis Ababa, Ethiopia.

"The fighting must end immediately," Ban said. "People need to be able to go back to their land to plant and tend their crops in peace. Hunger and malnutrition are already widespread. If this planting window is missed, there will be a real risk of famine. That is why we are calling for 30 days of tranquillity backed by both sides."

The fighting in South Sudan broke out last December when clashes erupted between soldiers loyal to Kiir and others loyal to Machar. Kiir accused Machar of leading a coup against him, a charge Machar denied.

As the fighting intensified, Machar fled the capital, Juba, and began leading a rebellion against Kiir, calling on him to step down. The conflict soon took on an ethnic dimension between South Sudan's two largest groups, the Dinka and the Nuer. Kiir is of the Dinka background, while Machar belongs to the Nuer group.

"I am troubled by the accusations by both sides of breaches of the ceasefire already, and I urge maximum restraint by all parties," Ban said.

The UN Secretary-General said many thousands of South Sudanese have been killed, and atrocities have been committed by both sides since the crisis began five months ago, while more than a million people have been displaced, and nearly five million more need humanitarian assistance.

He warned that if the conflict continues, more people in South Sudan will either be displaced internally, or turned into refugees abroad, starving or dead by the year's end.

Meanwhile, the secretary-general also called on both warring sides in South Sudan to "fulfill their commitment by allowing humanitarian access -- by air, by road and in particular, by barge along the Nile."

"Peacekeepers and aid workers are operating under increasingly difficult circumstances," he said.

"Attacks on the United Nations and the humanitarian community are unacceptable," Ban said. "They must cease immediately, and all parties should respect international human rights and humanitarian law."

While urging the international community to support humanitarian action, Ban mentioned a shortage of 781 million (U.S.) dollars felt in the 1.27-billion-dollar financing estimate the UN humanitarian community needed by the middle of this year.

The secretary-general urged all countries to support the forthcoming May 20 donor conference on South Sudan, which will be hosted by Norway and the United Nations.