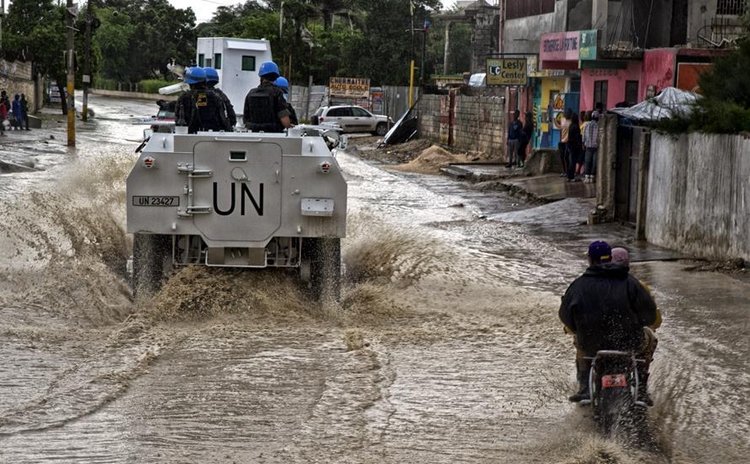 UNITED NATIONS, Oct. 5 (Xinhua) -- UN Secretary-General Ban Ki-moon on Wednesday voiced his wish to convey his solidarity with the people and governments of Haiti, Cuba and other nations in the Caribbean, affected by Hurricane Matthew.

In Haiti, the government reports that a number of people have lost their lives and estimates that at least 350,000 people need immediate assistance, the secretary-general noted in a statement issued here by his spokesman.

"While the full extent of the hurricane's impact remains unclear," the statement said, the team of the United Nations Disaster Assessment and Coordination (UNDAC) on the ground is working with partners to coordinate rapid assessments, with logistical assistance from the United Nations Stabilization Mission in Haiti (MINUSTAH).

UNDAC is part of the international emergency response system for sudden-onset emergencies.

In Cuba, more than 377,000 people were evacuated, 1,640 MT of food was pre-positioned in safe areas, and measures were taken to protect communities and infrastructure threatened by strong winds, rains, storm surge and floods, the statement said.

"The secretary-general lauds the preparedness efforts of the Cuban authorities, media, and civil society to protect people's lives and economic assets," said the statement.

"Across the region, the United Nations is in contact with the authorities and stands ready to assist with response and recovery if required," the statement added.

The category four hurricane, meaning it can pack winds of between 209 and 251 km per hour, is forecast to dump as much as 200 to 300 mm of rain, up to 500 mm in mountainous areas, and cause flooding along the island's southeastern coast.

Matthew earlier barreled through western Haiti, killing three people, while another remains missing, and displacing some 9,000 people. It is expected to turn north-northwest by Wednesday, heading to the Bahamas and the east coast of the United States.