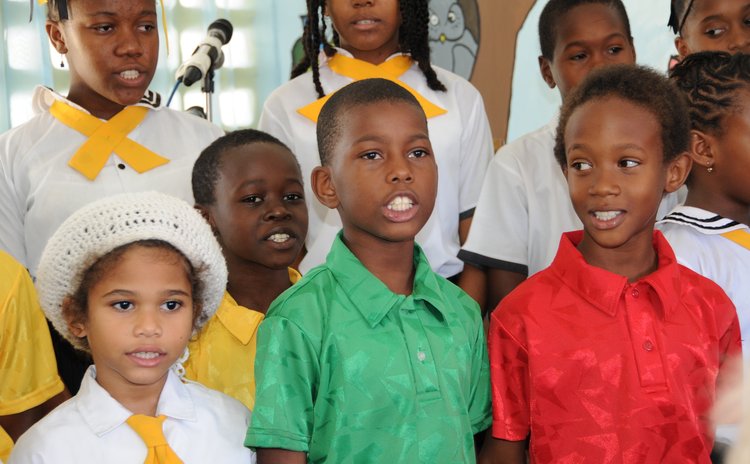 Students of the Roseau Primary School

UNITED NATIONS, Nov. 20 (Xinhua/Sun) -- UN Secretary-General Ban Ki- moon on Thursday marked the Universal Children's Day, saying " every child has the right to survive and thrive, to be educated, to be free from violence and abuse, to participate and to be heard. "

In his message for the Day, which is celebrated on Nov. 20 every year across the world, Ban said: "The one thing all children have in common is their rights."

"These are innate human rights, as inalienable as those held by adults," he said. "But until 1989, these rights were not formally articulated in a legally binding instrument, nor were governments fully accountable to advance these rights for every child."

This all changed 25 years ago, on Universal Children's Day, when the United Nations adopted the Convention on the Rights of the Child. "It rapidly became the most widely ratified human rights treaty in history," he said.

To date, almost every country in the world has ratified the Convention, he noted. "In every region of the world, it has inspired changes in laws, changes in policies, and changes in the way we perceive children as holders of their own rights and in the way we work to promote those rights."

This year marks the 25th anniversary of the adoption of the Convention on the Rights of the Child by the UN General Assembly. The Convention, which has been ratified by 194 countries to date, sets out the civil, political, economic, social, health and cultural rights of children.

"It is fitting that we celebrate a quarter century of the Convention," he said. "But we must do more than celebrate. We must recommit ourselves to advancing the rights of every child, especially those who have been left behind -- those who have the least and need us the most."

"We cannot say that the rights of all children are fulfilled when, despite our progress, some 6.3 million children under five years of age died in 2013, mostly from preventable causes; when 168 million children aged 5 to 17 were engaged in child labor in 2012; when 11 percent of girls are married before they turn 15," he said.

To make the vision of the Convention a reality for every child will require innovative solutions, a major increase in resources, and political will to invest in children and put their well-being at the center of the political, economic and social agenda, he said.

"While accountability for the rights enshrined in the Convention lies with governments, we all have a common responsibility to uphold and protect those rights, which are fundamental to the strength of our societies," he said. "Together, let us stand up for the rights of children everywhere, for a more just and equitable world, and for a brighter future for all."