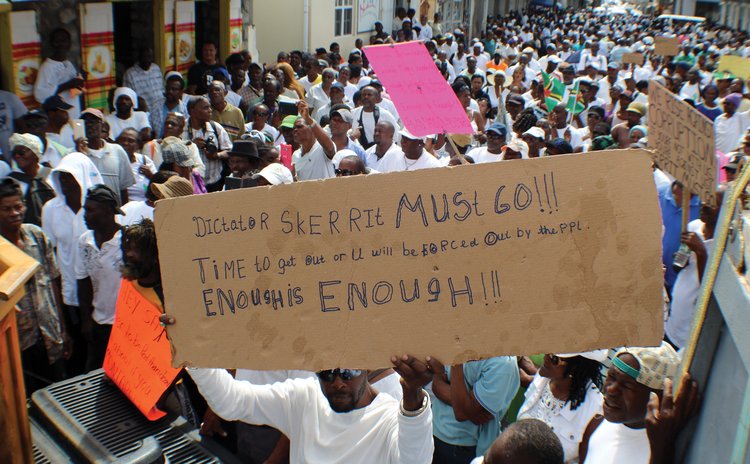 Protester holds up sign at the 7 February 2017 UWP protest

A recent survey commissioned by the ruling Dominica Labour Party (DLP) has found that a majority of Dominicans opposed opposition-organised protests to demand the resignation of the prime minister, Roosevelt Skerrit, over the issue of diplomatic passports.

However, the poll, conducted from 26-29 May, gave Skerrit and the DLP something to ponder as a full 30 per cent threw their support behind the demonstrations and another 21 per cent said they would support them it they were more orderly.

Pollster Peter Wickham concluded that "if the overall number of those who gave a conditional response (21%) were added to those supporting group (30%) those opposing the protest would be in the minority".

On the question of whether or not the protests and demonstrations are justified based on the reasons given by the UWP, a full 75 per cent of UWP supporters responded in the affirmative, while only 18 per cent of DLP backers agreed, according to the poll results, parts of which were made available exclusively to The Sun. Overall, 39 per cent of Dominicans agreed.

A source close to the prime minister had told The Sun that Skerrit was rattled by the turnout for the 7 February protest - which was followed by disturbances, prompting the Dominican leader to declare the opposition had planned to overthrow his government, although the charged that was quickly debunked by his own probe – and the fact that the protests continue, giving the impression that Dominica is in a state of unrest. Therefore, the poll results will come as a relief.

As it pertains to the impact of the protests on Dominica's image, there is virtually equal concern across the political divide, with only 20 per cent of Dominicans not concerned at all. However, 70 per cent are somewhat or very concerned.

The root cause of the opposition protests, the Citizenship by Investment (CBI) programme elicited some interesting responses. While two-thirds of DLP supporters (64 per cent) felt it is fine as it is, overall, only 39 per cent of Dominicans shared this view. On the other hand, half of UWP supporters and uncertain voters (53 per cent and 49 per cent respectively), and 39 per cent of Dominicans felt the passport programme should be overhauled and maintained. Few (12 per cent) felt it has outlived its usefulness, and fewer still (10 per cent) felt it has never been good for Dominica.

Making reference to the level of negative press that the programme has had, not only here, but in countries like Antigua and St. Kitts as well, Wickham told The Sun that "people feel it's beneficial but it's time to start thinking about life after CBI."

The poll, which was commissioned for internal purposes – Wickham explained it was never meant to be made public – found that while UWP leader Lennox Linton is more popular than the previous party leader, Skerrit remains twice as popular as the opposition leader.

Still, there are signs that the prime minister "has lost some ground . . . due to natural attrition."

"If an election is called tomorrow I think the DLP will win, but the seat count, the poll will not help you," Wickham says, reiterating that the survey was not conducted for that purpose, but to determine how Dominicans feel about the demonstrations. On the major issues of concern to Dominicans, the poll found that cost of living has overtaken employment as the primary worry.

Forty per cent of Dominicans said they are concerned about the cost of living, while employment is the major concern for 20 per cent of the people and on 13 per cent cited the economy as the primary issue.

The CBI hardly registered, with only one per cent listing it as an important issue.