U.S. campaign against IS will take time: official 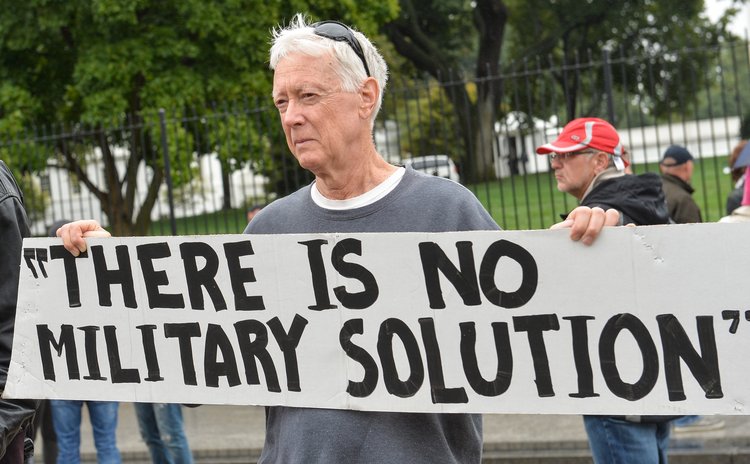 WASHINGTON D.C., Sept. 25, 2014 (Xinhua)-- A peace activist protests against U.S. military actions in Iraq and Syria outside the White House in Washington D.C., capital of the United States, Sept. 25,

WASHINGTON, Sept. 26 (Xinhua) -- U.S. campaign against the Islamic State (IS) will continue and take time, Chairman of the Joint Chiefs of Staff Martin Dempsey said at a Pentagon news conference on Friday.

This week's U.S. airstrikes demonstrate that the IS has no safe haven inside Syria, Dempsey said.

"Our targeted actions are disrupting IS's command and control, their logistics capabilities and their infrastructure in Syria," he said. "While in Iraq, we are empowering our Iraqi partners to go back on the offensive."

The U.S. strategy will be to continue to build, guide and sustain a credible coalition, said the official, referring to the participation of Arab countries in the U.S.-led coalition that undertakes airstrikes in Syria.

Dempsey also said that the ground force is needed, but it doesn't have to be an American one.

The chairman said Iraqi, Kurdish and Syrian forces are better to combat IS on the ground, adding American advisors are already working with Iraqi and Kurdish forces and the training and equipping of the Syrian moderate opposition has just begun.

Also at the press conference, U.S. Defense Secretary Chuck Hagel told reporters that defeating the IS forces will require a long-term commitment by the United States and its allies on many fronts and will not be achieved by airstrikes alone.

"This will not be an easy or brief effort," Hagel said. "We are at the beginning, not the end."

Since Aug. 8, the U.S. forces have carried out more than 200 airstrikes against IS targets in Iraq. The result of more than 40 airstrikes conducted by the coalition in Syria this week is still being assessed.

Meanwhile, U.S. military assessment teams have arrived in Saudi Arabia where the Syrian forces are set to be trained. The U.S. Congress has approved 500 million U.S. dollars to fund the training of Syrian opposition forces. Hagel said it could take a year before the first batch of Syrian troops are sent into battle. Enditem