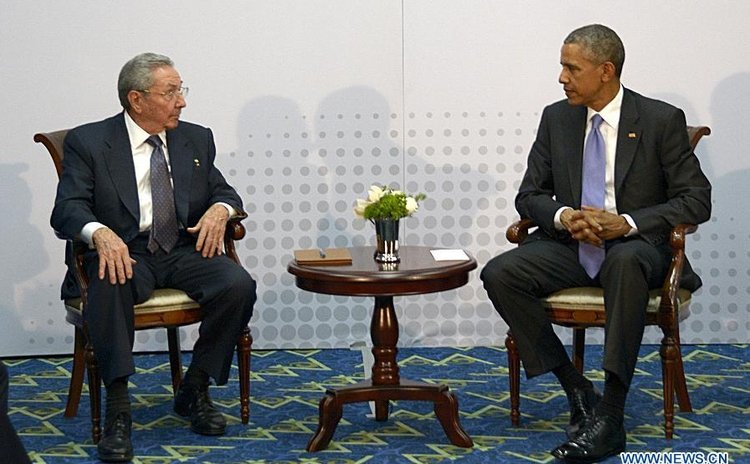 PANAMA CITY, April 11 (Xinhua) -- U.S. and Cuban presidents on Saturday held first face-to-face talks in over half a century in Panama City, amid detente between the two nations.

The meeting between U.S. President Barack Obama and Cuban leader Raul Castro was held on the sidelines of the 7th Summit of the Americas, in which Cuba participated for the first time.

This was the first substantive face-to-face meeting between Obama and Castro after the two countries announced the start of normalization of relations in December 2014.

During their meeting, the two leaders pledged to restore diplomatic ties and normalize relations.

Castro said his government is open to all issues including human rights and press freedom.

"I think everything can be discussed, if it is done with mutual respect," said Castro. "Perhaps we will agree on certain things, not on others."

"We have to be realistic," he said. "We have many differences and a complicated history, but we are willing to make progress at the meetings to establish diplomatic ties."

Obama, meanwhile, said, "We are now in a position to move on a path towards the future, and leave behind some of the circumstances of the past that have made it so difficult for our countries to communicate."

He also expressed gratitude for Castro's "spirit of openness," saying the two nations will be able to make progress in restoring relations "based on mutual respect."

The United States and Cuba have held three rounds of talks on restoring diplomatic ties over the past three months.

After his meeting with Castro, Obama told the media that Cuba is not a threat to the United States. Washington is not in the business of "regime change" and the cold war on Cuba is over, he added.

He also said he has not yet decided on whether to remove Cuba from State Sponsors of Terrorism List.

The U.S. State Department has completed the review of Cuba's status and recommended the removal of Cuba from the list.

Obama vowed before to act quickly once he receives the department's recommendation, which has been handed to the White House.

"I appreciate as a positive step his recent statement that he will quickly make a decision on Cuba's inclusion on a list of countries that sponsor terrorism, and on which it should never have been included," Castro said Saturday in his speech at the summit.

Cuba was added to the blacklist in 1982 and its presence has been a major sticking point in the restoration of full diplomatic relations between the two countries.

According to the U.S. State Department, Cuba's being on the list was partly due to its support for members of the Revolutionary Armed Forces of Colombia (FARC), Colombia's largest rebel group.

Havana now serves as a key player to facilitate peace talks between the Colombian government and FARC. Colombian President Juan Manuel Santos has expressed gratitude to Cuba on various occasions.

The inclusion in the list means restrictions on U.S. foreign assistance; a ban on defense exports and sales; certain controls over exports of dual-use items; and miscellaneous financial and other restrictions.

U.S. decades-old economic and trade embargo against Cuba is another stumbling block in the process of detente.

The Cuban leader said the economic embargo continues despite the process of diplomatic reconciliation that officially began in December, and called for an end to the policy, which has crippled the island's economy for more than 50 years.

He said the economic, commercial and financial blockade is still being fully enforced against the island, causing damage and shortage to the Cuban people, and it is the main obstacle to Cuba's economic development.

The blockade violates international law and its extraterritorial reach affects the interests of other states, Castro said.

Obama has eased some restrictions with executive orders, but he still needs the Republicans-controlled Congress to completely lift the embargo, which is hard due to the opposition from Republican lawmakers.