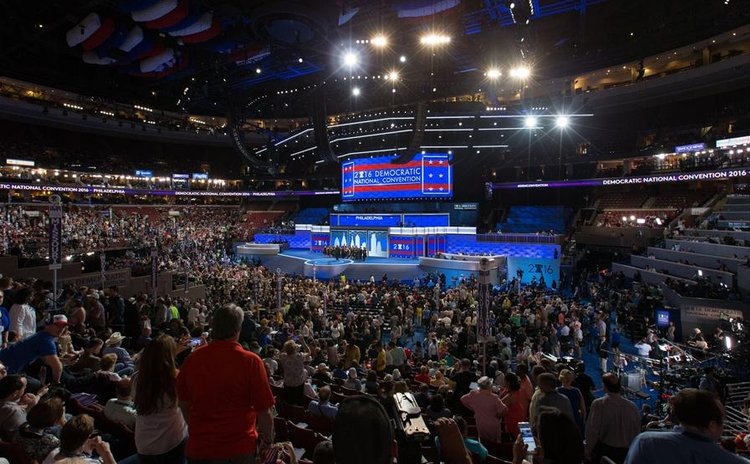 While the four-day event was supposed to showcase party unity with Sanders finally falling in line behind presumptive Democratic presidential nominee Clinton, a newly disclosed trove of emails by WikiLeaks discredited party establishment's claim of neutrality and threatened to derail Clinton's effort to unify disgruntled supporters of Sanders.

According to contents from the almost 20,000 emails sent by Democratic National Committee (DNC) officials, DNC staff members appeared to discuss ways to hobble Sanders' campaign and make mockery of Sanders.

In one email, DNC Chief Financial officer Brad Marshall asked whether someone can confront an unnamed person about "his belief" in front of religious voters in the South, and in another email, a DNC communications official wondered whether it was a good idea to sell a narrative of Sanders' campaign being a mess to reporters.

Though the email communications provided merely proof that some officials within the DNC held grudges against Sanders, the revelation justified long-held complaint from Sanders that the DNC was biased against him in the primary season.

Amid the escalating controversy surrounding the revelation, Clinton ally and DNC Chairwoman Debbie Wasserman Schultz announced on Sunday she would resign at the end of the party's convention.

As the news of possible DNC bias against Sanders sank in on Monday, delegates here attending the convention were indignant wherever Wasserman Schultz appeared or when her name was mentioned.

According to local media reports, Wasserman Schultz, also a House lawmaker from the state of California, faced jeers during a breakfast meeting with delegates from her home state.

Also in a gathering of Sanders' supporters here on Monday, the mere mention of Clinton's name was raucously booed.

Speaking here on Monday, Brian Fallon, press secretary for Clinton, told reporters that Clinton did not condone the attempted sabotage efforts revealed in the emails.

"It's very distressing to learn that anybody would contemplate using somebody's religion as an issue in the campaign," Mr. Fallon said. "That's completely unacceptable and against our values as Democrats," said Fallon.

Though Wasserman Schultz's resignation was welcomed by Sanders team, the compromising posture from the party establishment had so far failed to abate grassroots aversion to Clinton as the former U.S. secretary of state was attempting to soothe relations with disgruntled Democratic base.