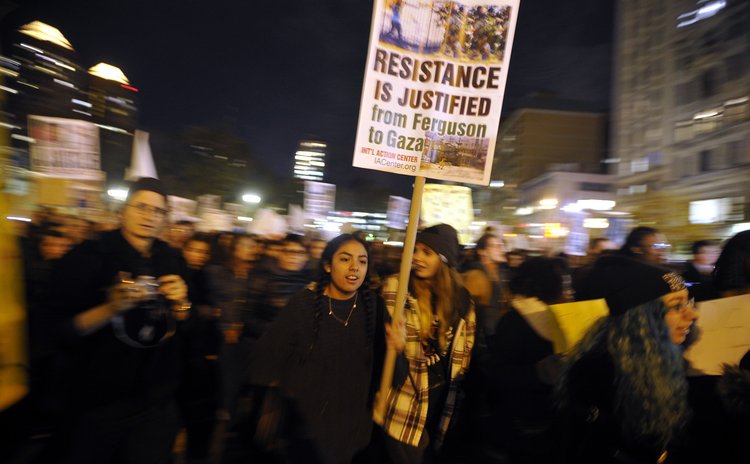 WASHINGTON, Nov. 25 (Xinhua/Sun) -- Thousands of people in Washington, New York, Boston and a dozen of other cities across the United States on Tuesday continued protests against Monday's decision by a Missouri local grand jury not to indict a white police officer in the fatal shooting of an unarmed African-American youth.

From the country's capital to the commercial metropolis, protesters marched and chanted their discontent with the grand jury's decision, but the demonstrations remained peaceful, comparing with the violence that marred the outrage in Ferguson. It's in this small city of Missouri State, where Michael Brown, 18, was killed by police officer Darren Wilson on August 9.

Local television reports showed that in Oakland, protesters lay in the middle of an intersection in silent at the beginning, then marched down Broadway shouting, "Hands up, don't shoot," and "Black lives matter -- all lives matter." Others set garbage cans on fire and vandalized or broke into stores.

In New York City, hundreds marched through Manhattan's Union Square on Monday holding signs saying "Jail Killing Cops" and "Resistance Is Justified." Protesters, initially penned in an area at the northern end of the square, pushed the metal barriers aside and rushed toward the Greenwich Village.

In Washington, hundreds of people marched in downtown, chanting, "We need justice, We need peace" in front of the White House and several business streets of the capital.

In Chicago, a few dozen of protesters gathered Tuesday morning on a downtown street corner, planning to be there for 28 hours.

And Atlanta, birthplace of the Rev. Martin Luther King Jr., also saw emotional reaction on Tuesday. Over 200 protesters stood outside CNN Center and at a popular tourist shopping attraction, chanting: "Enough," "It's a travesty; it's just not right."

After the death of Michael Brown in Ferguson, there had been a series of follow-up protests in the small town, featuring tense standoffs between protesters and police in riot gear.

The Ferguson riot lasted for weeks and the situation resumed calm for almost three months until the grand jury worked out the decision Monday evening.