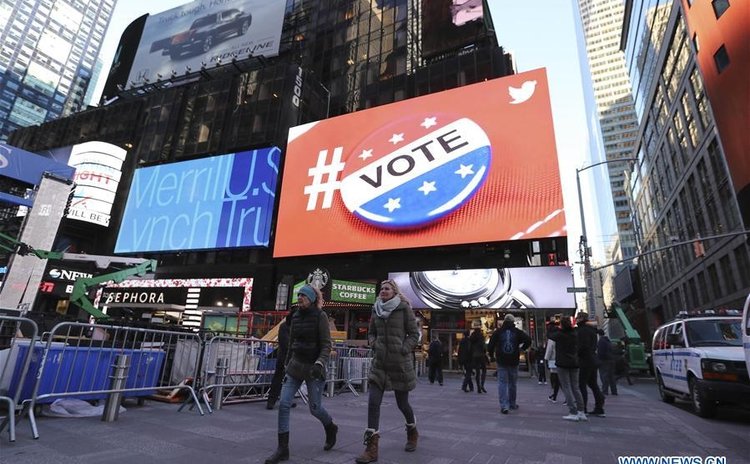 People walk past a screen showing a media advertisement for the voting day at the Times Square in New York, the United States, Nov. 7, 2016. The U.S. general election will be held on Nov. 8. (Xinhua/W

WASHINGTON, Nov. 8 (Xinhua) -- U.S. voters are to cast their ballots on Tuesday to elect their 45th president, who is likely Democratic candidate Hillary Clinton or Republican hopeful Donald Trump.

Starting in 1792, U.S. presidents and vice presidents have been elected quadrennially on the Election Day, the first Tuesday after the first Monday of November.

U.S. voters only cast their ballots for a slate of electors of the U.S. Electoral College, who in turn elect the president and the vice president.

The current U.S. presidential election system, featuring the Electoral College, was originally established by Article Two of the U.S Constitution, as a result of a compromise between those who wanted the U.S. Congress to choose the president and those who preferred a national popular vote.

During the nomination race, usually from January to June of an election year, primaries and caucuses are held in 50 states, the District of Columbia and all U.S. territories, to elect a presidential nominee for each major political party.

As hundreds of millions of U.S. dollars are needed to sustain the protracted campaign cycle, candidates have to exert themselves to collect political donations throughout the election year.

Voters can either cast their ballots prior to or on the Election Day, depending on different voting laws of each state, or send in their ballots by mail. But the ballot is actually voting to select the electors.

Under the U.S. Constitution, the number of Electoral College electors for each state is equal to the number of its Senators and Representatives in the U.S. Congress. The District of Columbia, which has no congressmen, is granted three electors. U.S. territories are not represented in the body.

All states except Maine and Nebraska employ the "winner-takes-all" system, meaning whichever ticket wins the popular vote wins all of the state's electoral votes. Any pair of presidential and vice presidential candidates who gain at least 270 electoral votes of the total 538 are claimed the winners.

In Maine and Nebraska, the electoral votes are divided between the candidates depending on the result of the state's popular vote.

Although the president-elect and vice-president-elect usually can be yielded on the Election Day, the official voting for them by the Electoral College is held on the first Monday after the second Wednesday in December.

If no presidential candidate wins at least 270 electoral votes, the House of Representatives will choose the president and the Senate the vice president.

In addition to candidates from the Democratic and Republican parties, several small political parties also put their candidates' names on the ballot. However, mainly due to the "winner-takes-all" policy, U.S. electoral politics is still dominated by the two major parties