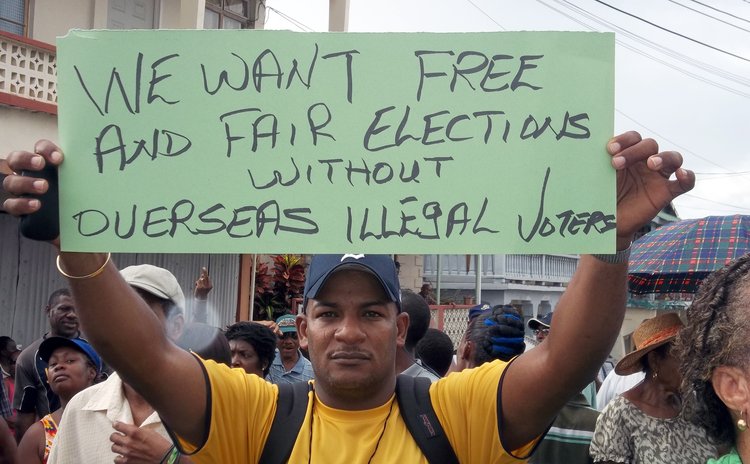 A man holds up a sign at the protest

An irate crowd of United Workers Party (UWP) supporters gathered outside the Electoral Office on Friday afternoon claiming that the 8th December 2014 elections were tainted, not "free and fair" at all.

Lennox Linton, political leader of the UWP and Opposition Leader-in-waiting, announced on December 11, 2014 that he would be visiting the Electoral Office for a meeting with the Chief Elections Officer and the Chairman of the Electoral Commission. After waiting for more than an hour, and surrounded by the police in battle gear, Linton and his supporters concluded that the officials would not show up.

"We are assembled here, we have agreed for three people only to go inside and we have gone inside and there is nobody there, no chief elections officer, no chairman of the commission; they knew we were coming because hours ago they had police blockade areas hundreds of yards across the facility to restrict the people's access to the people's building and now they are not there," Linton told the crowd.

He added: "We have the Grand Fond matter top on our agenda this afternoon; we announced last night that I will be visiting the Electoral Office today and I did invite people who had an interest in this matter to come down as well."

Supporters of the UWP claim that the 8th December 2014 elections, won decisively 15-6 by the ruling Dominica Labour Party (DLP) were tainted and that they were robbed of victory. They say the elections were certainly not free and definitely not fair. But an Organisation of American States (OAS) observer mission had a different opinion.

"The Mission congratulates Prime Minister-elect Roosevelt Skerrit and the Dominica Labour Party (DLP) for their victory in yesterday's General Election and recognizes the efforts undertaken by the Electoral Commission and the Chief Elections Office to organize the electoral process and ensure that the elections were carried out successfully," the mission stated in its preliminary report.

At the end of Friday's gathering, Linton told the crowd outside the Electoral Office that the police officers said that the gathering was illegal and that the crowd should disperse immediately.

Linton stated: "I have said to the police we are already here we wish to wait for the elections officials until 4:00 pm which is the close of business, if they are not here by 4:00 pm I will address you again and we will go about our business in peace and we will come back another day because we have business here to do and nobody is going to take us away from doing our business; we will be responsible; we don't have any intention of destroying or damaging anybody's property but we have to do the business of the people of Dominica and free and fair elections is the business of the people of Dominica."

Meanwhile, UWP candidate for the Grand Fond Constituency Dr Thompson Fontaine who claimed last week that his seat at Riviere Cyrique was "stolen" told the crowd: "The plan was simple do not allow Thompson Fontaine to be announced the winner the night of the election so they announced Ivor as the winner.

"The same person that was tampering the votes the night before was there for the final count. In this final count when they realize every challenge of mine was successful because they could not defend why a clean cross, two clean lines they could not define why these were in the rejected ballots.

"They began to turn good ballots bad; so instead of my tally going up with the rejected ballots that were mine my tally started going down as a result.

"All we are asking for is a fair count of the votes; we did not sign off on the count the Electoral Commission knowing what was happening failed to send anybody up to Castle Bruce and they signed full well knowing that the ballots were disputed.

"With a fair and straight count I have won this election and that is why we are here," said Dr Fontaine.