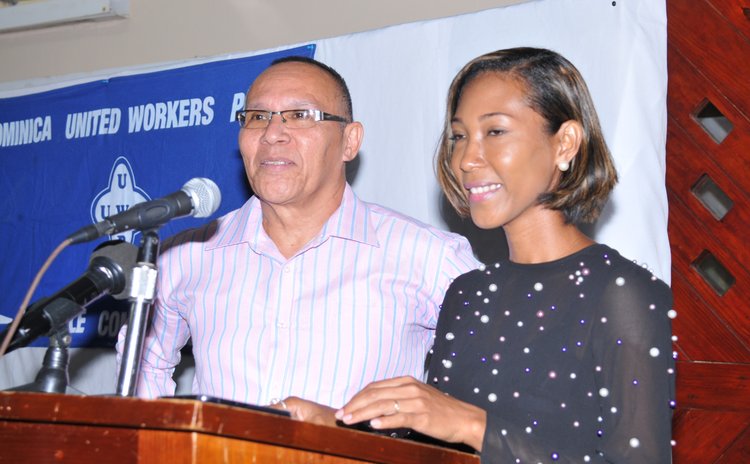 Dr. Sanford and Anette Sanford at the UWP press conference

There's a West African proverb that says: "Speak softly and carry a big stick; you will go far."

If you believe Dr. Worrell Sanford that proverb is very applicable to Annette Thomas-Sanford, the new United Workers Party (UWP) candidate who was officially named at a press conference last week at the Dominica Public Service Union (DPSU).

"Today, I announce my decision to stand as a political candidate to represent the people of the Salybia Constituency which includes the hamlets of the Kalinago Territory, Atkinson, and Entwistle," she said when the preliminaries were dispensed with. "I have chosen to align myself with the United Workers Party because this is the party with the best plan and the team of individuals best equipped to grow the wealth of the Kalinago people and restore pride in our beautiful Waitukubuli. I was deeply moved by the commitment of the political leader, Hon. Lennox Linton, who has committed to reimburse the remaining amount of the US 10 million which was misused by the outgoing government of Dominica".

Mrs. Thomas-Sanford added: "I stand to serve. I stand because I believe that Antrizzle, Atkinson and the Kalinago Territory, deserve more enlightened political leadership for this progressive era and I sincerely believe that I am capable of providing this visionary leadership. The complex set of issues confronting the Salybia constituency requires unity of the people, and a renewed commitment to self-help and collective action to realize meaningful development of the constituency. One of my first missions, if elected, is to construct a care facility for the elderly and physically challenged which will also serve residents from the east, providing them with 24 hour care.

"I was born in Sinecou; I grew up in Sinecou! I was schooled in the Kalinago Territory! I also, lived and worked in Atkinson; I am the embodiment of Kalinago struggle. I have served our communities as a health care provider with distinction - that I can confess. The invaluable experience I gained while working with our communities has given me strong familiarity with the social, political and economic challenges confronting our people. It is, therefore, a travesty that our communities continue to be the most marginal of Dominica's communities. The marginal nature of our communities needs to be reverse and a United Workers Party government will certainly accord higher priority to changing the current reality."

Mrs. Thomas-Sanford, the wife of former UWP candidate … Sanford, was one of the leading candidates for the recent election for the position of Kalinago chief. She lost by three votes to Lorenzo Sanford.

Last week, Dr. Sanford said he stepped down because his "circumstances have shifted quite a bit".

"I am a dad and a family man, and one of my little ones, in particular, demands the sort of attention that I cannot now offer, if I were to continue on my mission to effectively serve the people of the Salybia constituency," Dr. wrote in a letter to the Kalinago people. "I tried, believing that I could handle these two major responsibilities, and I did not fare well. My 4-year-old who has his own challenges is presenting behavioral changes due to my absence. My priorities must therefore be placed in order: my God, my family, my country".