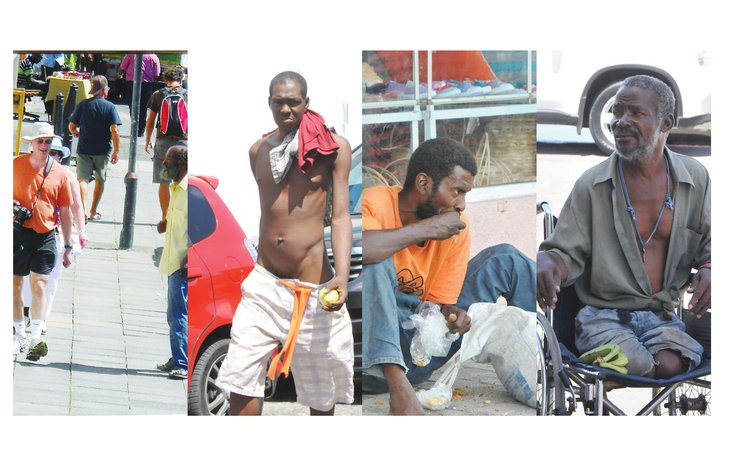 Four of dozens of vagrants in Roseau

While the authorities wait and wait, and wait some more to act, the vagrant population in Roseau has explored.

"Every day I see a new one," a resident of Roseau said to The Sun.

"Each time I look, it appears that yet another young person joins the community of vagrants," said psychiatrist Dr. Griffin Benjamin as he delivered a lecture at the Dr Bernard Sorhaindo Eighth Annual Memorial Lecture in August 2015.

Currently there are about 100 people described as vagrants in Roseau and environs, mainly young men, whom Dr Benjamin has defined as drug or alcohol abusers, physically or mentally ill persons who continuously walk the streets, forage in garbage, and harass tourists and locals alike.

Dominica's government has recognized the negative impact of the growing vagrancy population on tourism in particular and has devised plans to deal with the problem. That was six years ago. Nothing much has been done.

According to a draft vagrancy policy obtained by the Sun: "In 2010 Cabinet advised the Ministry of Health through Cabinet Paper No. 0580/2010 to lead the way forward in developing an action plan to deal with the on-going problems with vagrancy."

But the vagrancy problem worsened and has threatened the tourism industry.

Recognising the problem, the ministries of tourism and health collaborated to find solutions and a proposal was designed for the rehabilitation and social reintegration of vagrants.

"The proposal was prepared in 2013 and was twice submitted to Cabinet. However, it was withdrawn. Attempts have been made to re-address the situation and the proposal was again discussed by the Committee of Permanent Secretaries," states Strategies to Address Vagrancy in Dominica, a Cabinet Paper issued in November 2014.

In 2014 the Dominica Hotel and Tourism Association (DHTA) stepped in and more meetings were held and subsequently the DHTA presented a Concept Paper.

A plan for the creation of a Day Hospital for vagrants was proposed and also longer term strategies for resolving the general problems of vagrancy in Dominica.

Following another year of discussion and countless recommendations, in May 2015 the Cabinet of Prime Minister Roosevelt Skerrit accepted a proposal to address the problem of vagrancy. The problem remains unsolved. So who is responsible for the delay in implementing these proposals? We do not know. During our research The Sun heard many accusations of lack of interest of people at various levels of government. To clarify the situation, The Sun made several attempts to speak with both the Minister and Permanent Secretary of the ministry of health.

Up to press time our many attempts had failed.