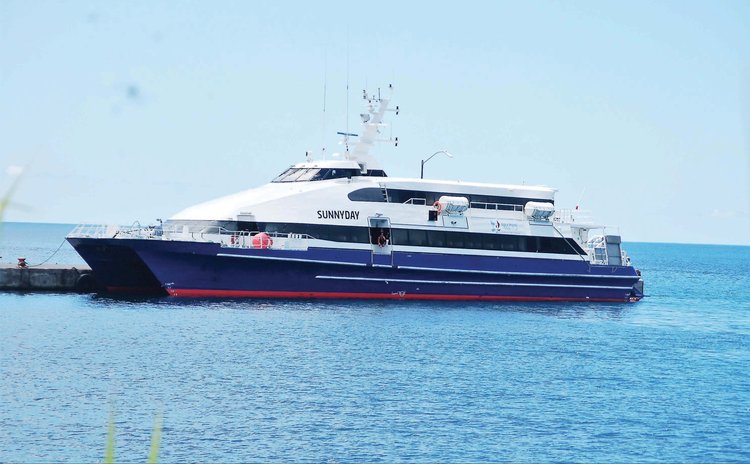 From Portsmouth you can easily see Guadeloupe, the northern of the two French islands between which Dominica is sandwiched. Guadeloupe is just a few miles away, across the sleepy Caribbean Sea.

Now, getting to Guadeloupe from Portsmouth has been made much easier by Val Ferry, the relatively new sea travel service that began on August 4th 2018. And, additionally, travelling to Guadeloupe within one day has provided a new appetizing dimension, especially for hucksters and other business persons.

Owned by two brothers, Guy and Claude Vala of Guadeloupe, Val Ferry has made the dream of hassle-free travel within the sub-region a little closer to reality.

"Quite a bit of the hucksters, quite a bit of the people on the north have used the service," said Wadix Charles, a promoter of the service. "During the absence of Ross University we have generated some level of activity. Basically, we have seen the buzz in the taxi business, accommodation services."

Charles says the one-day-to-Guadeloupe-and-back service on Fridays has been Val's best offering so far.

"We leave in the morning at six, reach Guadeloupe by about eight. That gives you time to do your business and come back to Dominica," said Charles adding that one-day travel eliminates the need to identify accommodation in Guadeloupe, a requirement of French authorities on longer stayovers.

Since Val Ferry started operating in Portsmouth, one of the constraints for travelers from the south and other parts of Dominica has been the need for land transportation to get to and from Portsmouth. Charles says that problem will no longer exist.

"From the 12 of this month we will adding to Portsmouth a service coming to town," said Charles. "The thing about it it's the same price. There's no added price."

And if the many potholes on the road to the Long House jetty , where the ferry now docks, are filled and the Cabrits terminal is made usable again, then its smooth sailing for the business of Guy and Claude.

Meanwhile, given the high cost and hassle of air travel within the region there is renewed interest in ferry services.

As George Nicholson, the Research Assistant of the Directorate of Transport of the Association of Caribbean States said in an article titled: "Towards 'one common intention'… A passenger ferry for regional transport", the establishment of both a functional and profitable regional passenger ferry service is not beyond the realm of possibility.

After all Val Ferry and L'Express des Iles are currently demonstrating that sea travel can make waves in the Caribbean.