JUMP BALL No. 71:By Arlington James 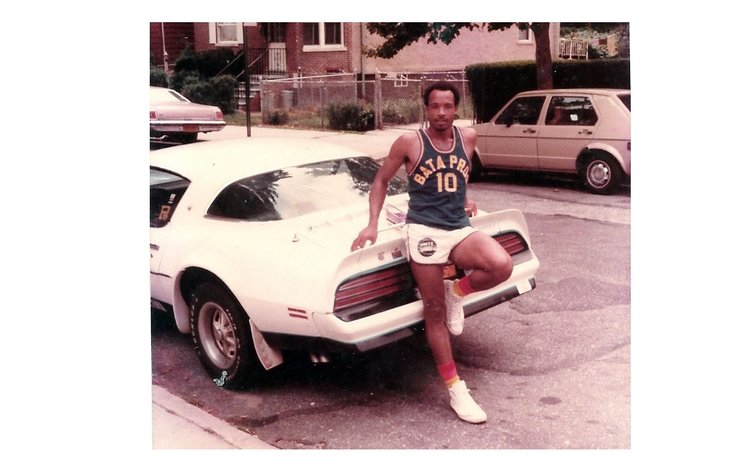 During his time on Earth and running the basketball courts this stocky Grandbarian drew many favourable comments from the local press. "The experienced and consistent Pros veteran..."; "With an ever enthusiastic Lambert Henderson as Guard I can see them stunning opponents with the fast-break", and "…A. St. Hilaire 28 and L. Henderson 25 were ruthlessly machine-like in toting up those baskets…" (vs DGS, in a 97-46 blow-out), are just a sample of those comments.

He was also described as "The old warhorse" and a "star scorer", while a basketball article in the local press was headlined, "Lambert Henderson in the Limelight".

Yes, that was the man Lambert "Lambie" Henderson, a native of Mabouché, Grand Bay whose stay on Planet Earth was unfortunately "cut off in the prime of his manhood" (R. St. Havis Shillingford, June 1996), when he was just shy of his 43rd birthday.

Jump Ball first mentioned some of Lambie's exploits on the basketball court in the column's opening edition, "Pros: They Were the Pride of Sout' City in Basketball" which was published in October 2016. The following year his artistic talents received mention in Jump Ball's "Arts… Basketball… Culture: Basketballers on Stage", and in 2018 his basketball brillance was again noted in the column's "Listwè Basketball An Gwanbé".

Further, shortly after Lambert's passing Reginald St. Havis Shillingford featured Lambie in a Sports Commentary in The New Chronicle of 28th June 1996; that piece was appropriately titled, "Our Lambert Henderson".

That said, however, Jump Ball is now putting Lambert Henderson under the spotlight although it is now 24 years since his passing. He may be gone, but his distinguished stay among us is certainly not forgotten.

Born on 27th July 1953, Lambie had ten siblings, including Patrick, a.k.a. "Jockie" who was also a distinguished basketball player. Of his three children, Marie-Claire (now Marie-Claire Charles) and Jonathan only played recreational basketball on the court near their home, while Michele, now Dominica's Goodwill Ambassador, is a world-class singer and musician who has made Grand Bay and Dominica extremely proud!

And when Michele was asked recently what Lambert's family thought of him as a basketball player, reminiscing a bit she responded, "We were all very proud of Dad as a basketball player. His passion for the game was evident in his discipline. He practiced almost everyday and appeared to be very involved in the administrative aspects of the team (Pros), as I recall. He seemed very engaged with sponsors, consuming their goods and using their services, and wore his retired jerseys and sweatshirts with pride. His sportsmanship was a way of life."

Let us now look more closely at Lambert Henderson on the basketball court.

Lambie the Player: Lambie, also knick-named 'LIAT' on account of his speed and power, at age 19-years-old was a founding member of the famous Bata Pros who were formed in 1972 and debuted in the national basketball league in February 1973. They immediately made their mark with their signature fast-breaks, with Lambie, his brother "Jockie", Augustus "Perez" St. Hilaire, Bonti Liverpool, Pierre "Pierro" Charles (deceased) and others immediately grabbing the runner-up position in both the 1973 national League and Knockout competitions.

The following year (1974), i.e. in only their second season on the court, Lambie assisted in steering Pros to become the first team to dethrone the then "kings of the court", the Cardinals, who had already amassed 12 championships (League and Knockout) in only 6 seasons. He also helped Pros win their second League championship, in 1983.

Throughout his career, which lasted about 15 years, Lambie played with only one team in the national league, viz. Pros, and engaged opponents such as Ambassadors, Cardinals, Clouds, Concords, Dominica Grammar School, Eagles, Electrons, Flames and Harks. His other opposing teams included Killer Bees, Owls, Lions, Raiders, Rockers, Running Rebels, SMAGs, Starlights, St. Mary's Academy Gales and Wizards, among so many others.

Burning Nets: Lambie's early years on the court saw him burning nets, regularly emerging as top-scorer or a high-scorer. In his first year representing Pros and Sout' City, he was the 4th highest aggregate scorer in DABA's league, chalking up 197 points in 11 games at an average of 17.9 points per game.

Some of his hot scores during his career included 20 Pts against Cardinals, 34 against Cougars, 41 vs Rockers and SMAGs, and 43 and 44 versus Harks.

More than ten years after debuting Lambie, a veteran by then, was still chalking up high scores. In 1985, for example he was the 4th highest aggregate scorer in the Division I League with 183 points, and in 1988 he stepped up to the 2nd Highest Scorer position, but with 154 points.