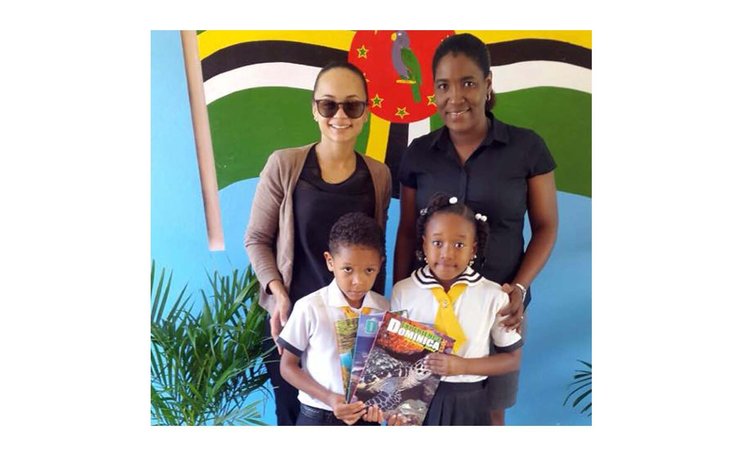 DHTA, teacher and pupils of the Roseau Primary with magazine

It's an upside down, back-to-front world that we live in. For it is rather obvious that teachers are our most valuable human resource; nonetheless we treat them as if they were as disposable as tissue paper-underpaid, unappreciated, and forgotten. We conveniently forget that teachers build, develop and mold citizens of the future and therefore they determine to a large extent the direction that our nation takes. Hence, we believe that the theme of World Teachers Day 2016: "Valuing Teachers, Improving their Status" is very appropriate.

As we have stated in earlier editorials, one of the major concerns of teachers, at this juncture in our development, is the crisis affecting our boys. Educationists say "a spiraling percentage" of adolescent teenage boys are displaying "intellectual lethargy and academic impotence". They claim that an unsettling number of male students show more susceptibility to the drug culture than girls; get suspended more frequently and generally view school and education as a waste of time.

This deviant behaviour pattern among boys, experts argue, is partly due to the fact that the number of male teachers in the education system is now abysmally low. Educators are becoming increasingly aware of the need for the presence of many more male teachers in order to remedy the situation of boys' underachievement and provide role models. In fact, one CARICOM government announced a few years ago that it was embarking on a "robust" marketing and recruitment drive to reverse the decline of male teachers through a robust campaign. Maybe we can adopt that idea here in Dominica.

So what are the reasons for men's avoidance of the classroom? The issue of salary is the major contributing factor, we are told. Many males go after higher paying jobs since teaching is not really a profession that pays salaries commensurate with the responsibilities and stress related to the job. Additionally, many males believe that teaching is women's work. Again, there is the prevailing philosophy within the education system that men go into teaching to "teach the subject," and women enter teaching to nurture and develop children. Hence, the argument states, males tend to gravitate toward secondary and tertiary educational institutions, leaving a critical shortage of male teachers at the elementary and pre-school levels. So, it seems that a possible solution to the problem of gender inequality is to increase the salaries of teachers to make the profession more attractive to men.

Another aspect of gender inequality that Dominican teachers may want to consider is that although women represent an overwhelming majority of students at every level of higher education, women are disadvantaged in terms of rank and institutional prestige.

But as we indicated earlier, gender inequality is not the only major problem affecting teachers in Dominica. Consider this: without teachers there would be no schools; without schools, our youth would wilt like flowers in the hot Dominican sun. This sounds simple enough. But paradoxically, policy makers continue to ignore that truism; they seem oblivious to the fact that teachers are absolutely important to the attainment of good quality education that is essential for achieving the level of sustainable development that we desperately need. So, here we see the relevance to the WTD 2016 theme: valuing teachers, improving their status.

Nevertheless, many persons are of the view that our education system itself has simply not worked well enough to ensure adequate levels of social and economic development. Though we have made some progress in terms of the population's access to education and our students have performed creditably at regional examinations, the overall quality of our education remains quite low. We also agree with the argument that most children start school at the appropriate age and enrolment levels at secondary school are high. Nonetheless, education officials are generally unhappy with our graduates' mastery of numeracy, literacy and their ability to think critically.

Additionally, given the high level of unemployment that exists side by side with the scarcity of skilled workers in many areas, the relevance of our curriculum is questionable. Another issue that the Dominica Association of Teachers (DAT), in particular, must be concerned about is what some persons consider to be the pervasive violence in schools. Indeed, many teachers will admit that coping with ill-discipline in schools is one of the foremost challenges of the teaching profession in Dominica and the rest of the Caribbean as well. They contend that the offences children commit in schools are various and can range from minor classroom or playground altercations, to incidents of violence that require the intervention of the police.

Last week, for example, the police were called to school in a number of fights among secondary school students on the streets of Roseau.

Whenever discussions on the level of ill-discipline in schools ensue, the fact that teachers no longer have the status they once had receives prominent attention and is offered as a cause of the problem. But deviant behaviour in schools has to be blamed also on examples that abound in the wider society. What happens in the homes and on the streets inevitably find their way inside the schoolrooms.

As Dominican teachers joined their counterparts in the rest of the world in observance of World Teachers Day last week Friday we hope that the teaching profession not only considers issues affecting teachers but also seeks ways to force society and government to acknowledge the value of teachers in tangible ways.