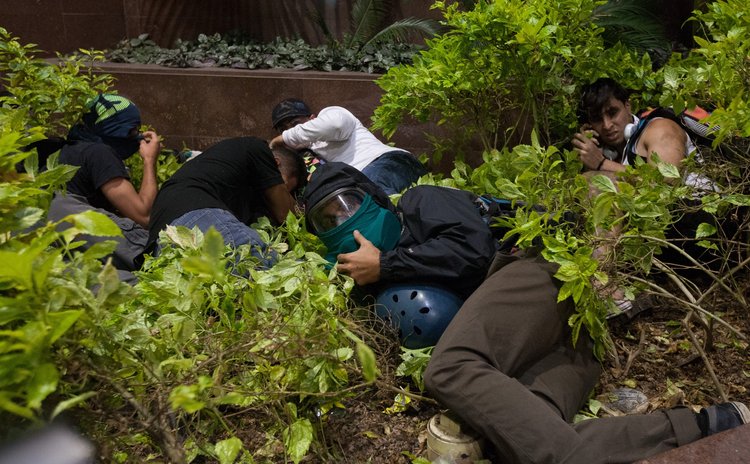 CARACAS, April 5, 2014 (Xinhua) -- Demonstrators take cover during a clash with Bolivarian National Guard in an anti-government protest, in Caracas, Venezuela, on April 4, 2014.

CARACAS, April 2 (Xinhua/ SUN) -- Venezuelan authorities have captured 18 suspects believed to be behind the recent wave of violent protests in the South American country, an official said on Wednesday.

The arrests were the result of an operation launched to determine "who were the alleged heads of the 'guarimbas' (violent protesters) and who was financing them," said Jose Gregorio Vielma, governor of the western Tachira state.

"These terrorists were the ones making the Molotov cocktails and threatening the population of Tachira, and that's why we will continue going door to door to find them," he told a press conference.

Vielam said the detained confessed to authorities that they came to the state with the express purpose of taking part in the violence.

"They were brought here to generate turmoil and they're tired of it," said the governor.

He said the perpetrators were mercenaries who received between 3,000 and 5,000 bolivars (105 U.S. dollars) a week to organize violent protesters and fuel the protests in the state, which borders neighboring Colombia.

The state capital San Cristobal is where violent anti-government protests first broke out on Feb. 4 and one of the cities with most entrenched violent protesters behind roadblocks.

"We have evidence that behind the 'guarimba' in Tachira is money from drug trafficking and paramilitary groups," Venezuelan President Nicolas Maduro said on Tuesday.

The protests, with the public venting anger over soaring crime, hyper-inflation and shortages of essential goods, have left 39 people dead and hundreds injured across Venezuela.