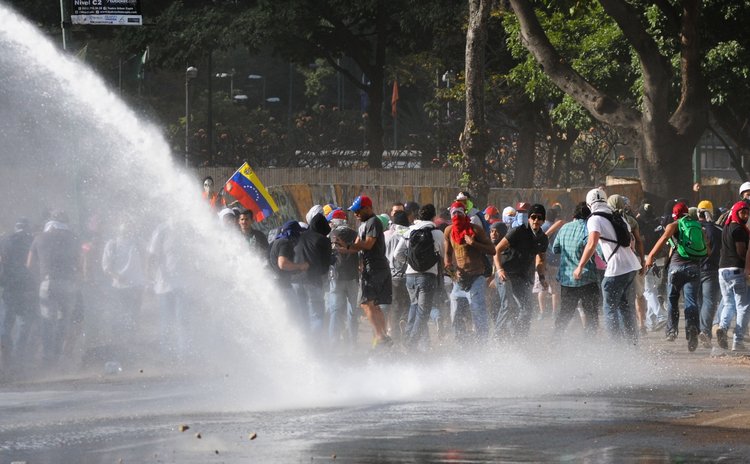 CARACAS, March 5, 2014 (Xinhua) -- Demonstrators are dispersed with water during clashes with the Bolivarian National Police in a protest in Altamira, in the Chacao municipality, Venezuela, on March 4

The bid to discuss Venezuela's internal crisis at the Permanent Council of the OAS is simply a move to "interfere," said Maduro, adding he will respond to any "attack" on national sovereignty.

During a military-civic parade in the capital Caracas marking the one-year anniversary of the death of former president Hugo Chavez, Maduro, Chavez's political successor, said "the OAS' nefarious history of 60 years of coups d'état belongs to the past."

Maduro's remarks came after the government of Panamanian President Ricardo Martinelli on Tuesday proposed an urgent meeting of Foreign ministers of OAS member countries to discuss the violent political protests in Venezuela.

"There's a right-wing government that's aiming to convene the Permanent Council of the OAS. It is a plan for the intervention of foreign forces in the country. I am going to respond forcefully and powerfully to any attempt at intervention in Venezuela. I ask the people for their support," said Maduro.

"The OAS should stay out of here now and forever. Our path is Unasur (the Union of South American Nations)," Maduro added.

"Leaders of the fascist (violent group) have been caught and (authorities) seized weapons of war, bombs, Molotov cocktails and other devices," he said.

The perpetrators will be brought before the Prosecutor's Office later in the day, he said, adding, "They must be punished, the law must be applied severely."

Maduro said protests were continuing "freely and calmly," though protest groups tried to block several main thoroughfares in Caracas earlier in the day to impede the anniversary celebrations. Ongoing protests initially called by extreme right-wing groups have led to violent clashes that have left 18 dead and about 300 injured, including 51 police officers, since Feb. 12, according to official figures