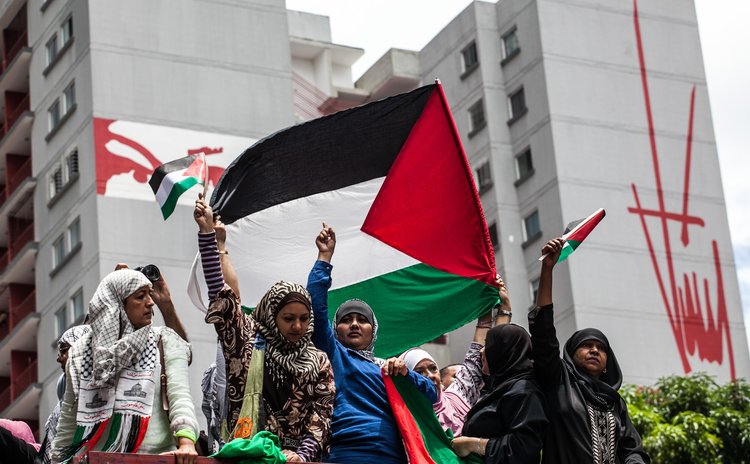 CARACAS, Aug. 2, 2014 (Xinhua) -- Venezuelans participate in a demonstration against Israeli offensive on Gaza Strip, in Caracas city, Venezuela, on Aug. 2, 2014

"The Venezuelan people know how to fulfill their humanitarian duty towards the Palestinian people," said Jaua, adding that another 15-ton aid is expected to be shipped in the next 48 hours.

The aid is being flown to Egypt, which has offered to coordinate its distribution to the Palestinians in Gaza that borders it to the south.

Accompanying Jaua was his Palestinian counterpart Riyad al- Maliki, who said Venezuela "has shown its brotherhood with Palestine."

The aid "is a reflection of the principles of the Bolivian Revolution launched by President Hugo Chavez and we are proud of the ties that we now have established with President Nicolas Maduro," said al-Maliki.

Jaua said member countries of the Union of South American Nations (Unasur) are set to condemn the military attack on Gaza, which has killed nearly 2,000 people, mostly civilians, and wounded more than 10,000 since July 8, during a meeting to be held next week in Uruguay.

"We have been working with several Foreign Affairs ministers in the region to issue a new statement in favor of an end to the military attacks against the civilian population and a return to dialogue, without conditions, towards a structural solution to the problem," said Jaua.

Venezuela last week offered to shelter Palestinian children who have been orphaned or injured by the fighting, a proposal whose feasibility the Palestinian National Authority is studying, said Jaua.