Venezuelan opposition leader to remain in jail during trial 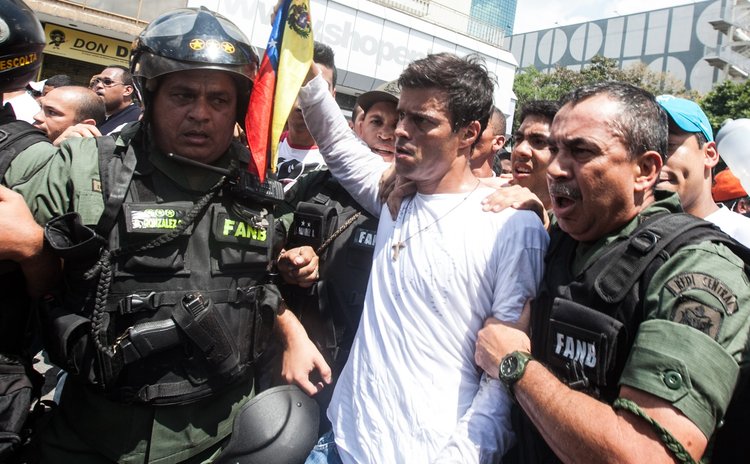 CARACAS, Feb. 20 (Xinhua/Sun) -- Venezuelan authorities on Thursday said the far-right opposition leader Leopoldo Lopez, who was arrested on four charges including inciting violence, will remain in jail during his trial.

Judge Dalenys Tovar confirmed the decision after it was announced by Bernardo Pulido, one of Lopez's defense lawyers, at the end of the court hearing held Wednesday, when formal charges against Lopez were pressed.

According to Pulido, his client was ordered to remain 45 days in detention at the National Center for Indicted Military Personnel in Ramo Verde, in northern Miranda state.

Authorities said the request that Lopez would remain in jail was made for his own safety, on suspicions that an attempt to get his life could be used to spark off even further violence.

Local media reports said the charges Lopez will face included conspiracy to commit a crime, inciting violence, arson and damage to public property. He could be sentenced to a jail term of up to 10 years if convicted.

Lopez is not being charged, as believed earlier, however, for the deaths of three men who were killed in violent protests that broke out on Feb. 12, after Lopez called on his followers to go out into the streets to demonstrate against the socialist government of President Nicolas Maduro.

Meanwhile, the Venezuelan government on Thursday strongly rejected U.S. President Barack Obama's declarations on the political turmoil in the South American country as "offensive interference" in its domestic affairs.

The government "emphatically repudiates the declarations made on Wednesday, Feb. 19, by the president of the United States, Barack Obama, to the extent that they constitute a new and offensive interference in the internal affairs of our country," said a statement issued by the Ministry of Foreign Affairs. Those declarations were additionally "based on false information and baseless contentions," the statement added.

Obama, who was in Mexico attending a summit of North American leaders, addressed the ongoing violent anti-government demonstrations in Venezuela, accusing the government of using the protests as a "distraction" from the country's economic woes.

"The declaration that independent governments and countries of the world are waiting for is one in which the government of the United States ... explains why it finances, encourages and defends opposition leaders that promote violence in our country," said the statement.

The U.S. government should also clarify "by what right Deputy Assistant Secretary (of State) Alex Lee relayed a message from his government, in which it tries to condition and threaten the Venezuelan government for its decision to prosecute those responsible for acts of violence in recent days," it said.

"The Venezuelan government reaffirms it will continue to monitor and take the steps necessary to impede U.S. agents seeking to sow violence and instability, and to inform the world about the nature of the interventionist policy of the Obama administration in our country," said the statement