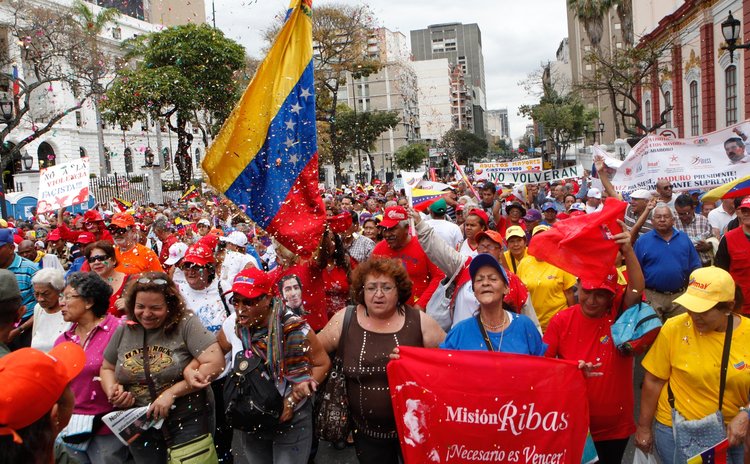 A march for peace and life in Caracas, Venezuela, on Feb. 23, 2014. Venezuelan President Nicolas Maduro took part in the march. (Xinhua/Venezuela's Presidency)

CARACAS, Feb. 23 (Xinhua) -- Venezuelan President Nicolas Maduro Sunday evening called for peace and coexistence in his country amid a possible coup conducted by the opposition.

Maduro said in a television interview that the hard-line opposition in Venezuela, supported by the United States, tried to take his country to the path of a civil war.

He called on all political, cultural, economic, religious and social groups to attend a national conference for peace on Wednesday at the Miraflores Presidential Palace in order to stop the violence.

The top leader added that security forces have slowly stopped violent protests held by the opposition, saying that these demonstrations have affected only 8 percent of the national territory.

The South American country has been beset with social turmoil since Feb. 12 and violent protests in Caracas have left at least nine people dead and 137 others injured.

He recalled the situation of the presidential elections in April 2013 after the death of President Hugo Chavez, saying that at that time the opposition also "tried to burn down the country, but failed and soon were neutralized."

Also in the interview, Maduro said that a visitor to the far-right opposition leader Leopoldo Lopez, who was arrested on Feb. 18 on four charges including inciting violence, was found with maps of the Venezuelan oil fields, which could help the opposition build up a plan to attack the country's major source of income.