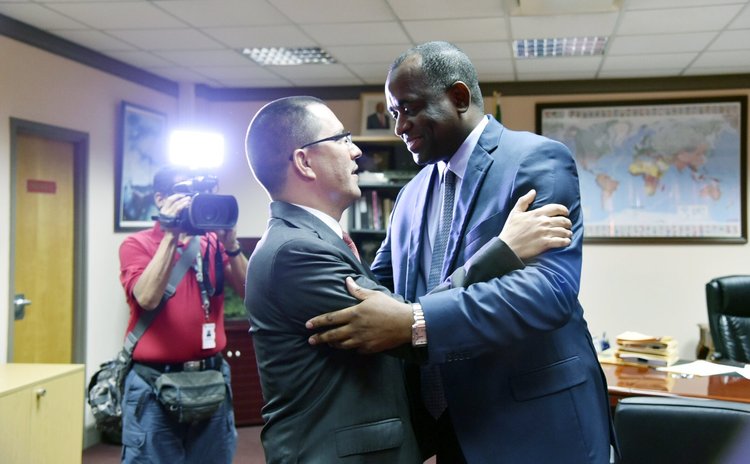 Prime Minister Roosevelt Skerrit and the Vice president of Venezuela have held discussions in Roseau on Venezuelan assistance to Dominica and the Caribbean.

Vice President Jorge Arreaza led a delegation, which included the Vice Minister for Foreign Affairs for Latin America and the Caribbean Alexander Waynez, to Dominica on Thursday, August 6, 2015.

Prime Minister Skerrit said the delegation discussed economic agreements such as the PetroCaribe project as well as the continuation of a coffee processing plant and an abattoir for Dominica.

"One of the major points that we have been discussing with Venezuela is the issue of the procurement of bitumen for the surfacing of the roads because that is a challenge we have," said Prime Minister Skerrit after the visit. "So the Venezuelans have, in fact, given us a firm commitment under the Petro Caribe Agreement they have a quota for us of about 200 barrel of bitumen per day which is our request to them. The President has, in fact, approved that request and it is now for us to operationalize it."

Skerrit said the Venezuelan delegation discussed a proposed regional project details of which, he said, he could not provide.

"I cannot speak of it specifically but it has to do with acquisition in the region that involves Dominica and other countries," Skerrit said on State-owned DBS radio last week.

A few weeks earlier Reginald Austrie, the PetroCaribe minister revealed that there were tentative plans for a visit to Dominica of Venezuelan President Nicholas Maduro for the renaming, after the late Hugo Chavez, of the PetroCaribe oil plant at Jimmit, a community on the south west coast of Dominica.

President Maduro's visit has not materialized.