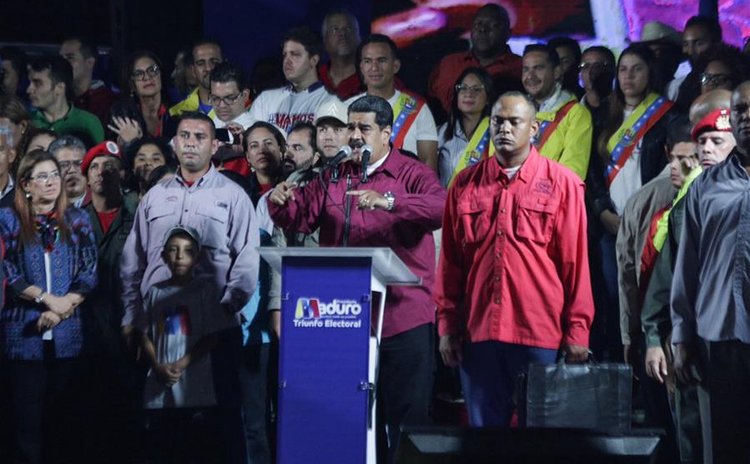 Venezuelan President Nicolas Maduro delivers a speech during a press conference after casting his vote in a polling center in Caracas, Venezuela, on May 20, 2018

Venezuela's President Nicolas Maduro won a new six-year term on Sunday in what is being seen as a controversial vote.

According to the results announced by Tibisay Lucena, president of the National Electoral Council (CNE), President Maduro obtained 5.8 million votes while his main opponent, Henri Falcon, collected a total of 1.8 million votes.

A total of 8.6 million Venezuelans voted, putting turnout at 46.01 percent, lower than the projected 48 percent, according to the CNE.

Maduro, an unpopular political heir to the late leftist President Hugo Chavez, hailed his win as a victory against "imperialism," but his main rival refused to recognise the results, alleging irregularities.

The country's main opposition coalition, the Democratic Unity Roundtable (MUD), had boycotted the election, while the two most popular opposition leaders, Henrique Capriles and Leopoldo Lopez, were barred from running in the vote.

Turnout in Sunday's vote was low compared with the 2013 presidential elections, which had a turnout above 80 percent. Polling stations were kept open beyond its closing time at 6 pm. Telesur, the state broadcaster, announced they would stay open "as long as there are people in line to cast their vote".

"This was a historic day!.. the day of a beautiful victory," Maduro said outside the presidential palace in Caracas on Sunday night.

"They underestimated me," the 55-year-old leader told supporters, as fireworks and confetti were fired in the air.

"Never before has a presidential candidate taken 68 percent of the popular vote," he said. "We are the force of history turned into a permanent popular victory."

But his main rival, Falcon, called for a new vote, alleging the election was marred by irregularities and lacked legitimacy. "We do not recognise this electoral process as valid," he told local media. "There must be new elections in Venezuela."

Claudio Fermin, the campaign chief of Falcon's party, said his team documented 900 cases of voting irregularities involving benefits being offered outside polling stations to those who backed the president.

"What we are witnessing is the abuse of power," Falcon wrote. "It's time to remove this cheating government," he added.

The United States, which has slapped sanctions on the Maduro government, called the elections a "sham", adding that it would not recognise the results.

Posting on Twitter ahead of the vote, the US mission to the United Nations called the process an "insult to democracy".

President of Chile, Sebastian Pinera, tweeted that his country "like the majority of democratic countries," would not recognise the vote, "it does not represent the free and sovereign will of the people, he added.

Laura Chinchilla, Costa Rica's president, denounced "electoral fraud in Venezuela" and called for the "retreat of ambassadors, and sanctions on members of the regime."

However, back in Venezuela, thousands of Maduro supporters danced outside the Miraflores presidential palace in the capital, Caracas.

"The result must be respected. I support Maduro's mandate, and it's obviously my wish for this process to continue," she added.

"[In the country] we have a large induced inflation ... but despite these conditions, President Maduro obtained a considerable advantage," Juan Romero, a writer and government supporter, told Al Jazeera.

"We expect pressure from international actors, but this is the time for Venezuela to reflect and to focus in a great effort to restore peace and order. Venezuela also needs to prevent foreign countries from intervening in its affairs, and to avoid ending in a process very similar to what happened in Libya," he said.

The opposition MUD said the elections were moved ahead to take advantage of divisions within the coalition.

Most of the candidates who might have run against Maduro were barred from running, including Capriles and Lopez.

"For the opposition, this was a disaster; the abstention was very high, they wasted a historic moment to defeat Maduro," Saverio Vivas, an opposition leader, told Al Jazeera.

"Had the opposition made a small effort to overcome the egos that ended up dividing them, today the results would have been different," he added.

And, although it's not clear for everybody what is coming next after this election, some members of the opposition say they will continue to fight.

"We will continue our fight. Politics is permanent, and we will keep fighting in the General Assembly... [we will respond from here] against this fraud," Rachid Yasbek, a member of the MUD, told Al Jazeera.