Venezuela's state of emergency extended by another 60 days, possibly to last longer 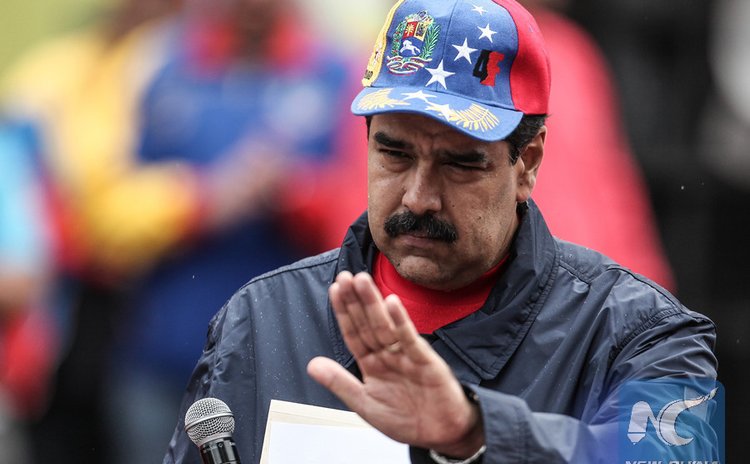 CARACAS, May 15 (Xinhua) -- After living in a state of emergency for four months, Venezuelans learnt Saturday they have to continue this way for another 60 days, and possibly throughout 2017.

Speaking at a massive gathering of supporters in central Caracas on Saturday, Maduro announced some of the actions to be taken under the decree, which has not yet been published.

"We must take all measures to recover productive capacity, which is being paralyzed by the capitalists," he told the crowd.

He said anyone trying to sabotage the country would be held responsible: They would be expelled from the country or thrown into the prison.

The Venezuelan leader said a day earlier on the national TV that some domestic forces were scheming with foreign ones to stage a coup in the country.

"Washington is activating such procedures...at the request of right-wing forces in Venezuela," he said in the televised speech

Maduro on Saturday also ordered the military to hold war games within a week to counter perceived foreign threats.

"I have called for military exercises ... to prepare for the defense of our land, our children, our rights to peace." Maduro told his supporters.

The decision to get troops ready for battle came after former Colombian President Alvaro Uribe in an interview on Thursday urged Venezuela's armed forces to take up arms against the state.

When talking about the situation in Venezuela, Uribe, now a Colombian senator, said the Venezuelan military should use their weapons to defend human rights and political freedom, rather than fighting for a dictatorship, local media reported.

Uribe's words were tantamount to foreign intervention in Venezuela, Maduro told the crowd.

On Saturday, Venezuela's Armed Forces issued a statement reaffirming their allegiance to the government, saying they categorically condemn "the systematic campaign orchestrated abroad to discredit and provoke Venezuela."

Venezuela announced a 60-day state of emergency on Jan. 14 amid a soaring inflation and a severe shortage of products.

Its national economy, heavily dependant on oil revenues, shrank 7 percent in 2015 as a result of plunging oil prices, and the annual inflation rate was at around 140 percent.

The government first extended the state of emergency for 60 more days on March 14, as the economic crisis facing the country showed no sign of improvement.

A drought also compounded the difficulties of daily life in the country by drastically slashing electricity supply, since the bulk of the country's electricity is generated by hydropower.

To cope with a worsening electricity shortage, the government introduced a raft of measures in April, including much shorter working hours at government institutions and public agencies and a nationwide rolling blackout.

Such measures have triggered discontent among the public. In the past few days, several cities in the country saw protests and looting of shops and food vans.

Riding on the public anger toward the government, the opposition collected 1.8 million signatures in support of a recall referendum to oust Maduro.

According to Venezuela's constitution, the opposition only needs signatures from 1 percent of the electorate, or 195,721 signatures to call for a referendum.

If these signatures are validated by the National Electoral Council, the opposition will then have three days to collect around 4 million signatures, or 20 percent of the electorate, to proceed with the referendum.