Tuesday is Nomination Day in the Grand Bay By-election 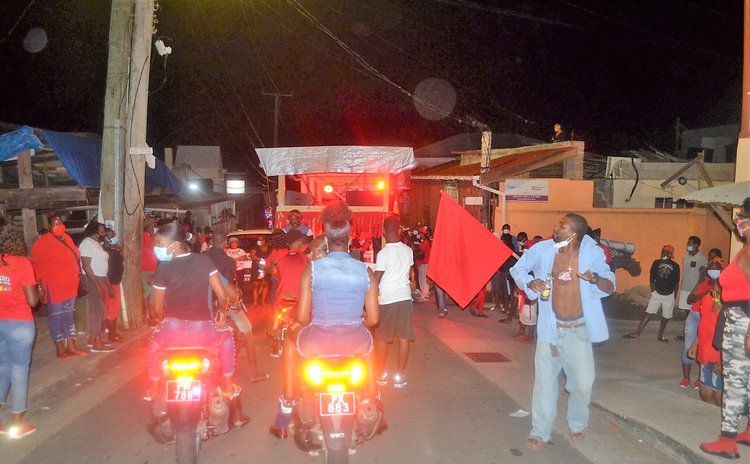 Grand Bay street after the by-election

A local bus driver who has publicly announced his intention to contest the Grand Bay by-election as an independent candidate says his symbol of the ladder is fitting for his plans for his constituency.

"I only want to take them up," said Julius "Handbag" Gabriel.

Handbag and Dominica Labour Party (DLP) candidate, Dr. Vince Henderson are the only two names mentioned in the race as the other political parties have chosen to abstain.

Recently, Prime Minister Roosevelt Skerrit laid all the rumours to rest as he announced Dr Henderson, Dominica's Ambassador to the United States and the Organization of American States (OAS), former government minister and senior party campaign manager as his chosen candidate to contest the upcoming Grand Bay by-election.

The pending race is to fill the parliamentary position in the Grand Bay constituency left vacant by the September 1, 2021 death of former MP Ed Registe.

At a meeting held with constituents, the DLP Skerrit leader put forward his nomination and pleaded with the voters to "trust me in what I am about to propose to you."

"You need a palrep; you need someone that will not only fight for you but someone that will be empowered to make things happen for you," Skerrit argued. "You need a representative with knowledge and experience and I need that same knowledge and experience in my cabinet of ministers to fill the void left by Pierre Charles, John Fabien, Nurse Charles, and now Ed Registe."

He said through Dr Henderson, the cabinet will gain much-needed reinforcement in challenging times such as the global Covid-19 pandemic.

The Prime Minister added that while each individual who presented him or herself as a possible candidate over the past weeks is "formidable", he insisted that he is not only seeking a parlrep in Grand Bay but is hoping to return the constituency to a position of authority and influence in the DLP and the government.

Skerrit's nomination was later ratified by the party's executive council and the date of Thursday, November 25, 2021, was announced as voting day while nomination was set for November 9, 2021.

Speaking exclusively to The Sun, Gabriel maintains that he is not intimidated by the Prime Minister's proposed candidate, Dr. Henderson.

He says Henderson is not attuned to their needs in Grand Bay and the constituency is in need of a "rootsman" to bring change, not a foreigner seeking a seat in parliament.

Gabriel dubbed the Prime Minister's nomination a "slap in the face" to other qualified Labourites who he said could have contested the by-election on a DLP ticket.

While some call him illiterate, the bus driver posited that the incumbent government has proven that well-educated individuals are unfit to govern the country.

"We have so much doctors and lawyers in parliament and people who finish school but what are they really doing for the people of Dominica, nothing. With all their education you would think they would have Dominica further but no. I am a rootsman and I know the people struggle, I live the struggle so I can help my people out of that struggle," he said.

The would-be parliamentary representatives proposed development plans for the Grand Bay constituency includes full economic enfranchisement for all, the creation of sustainable job opportunities especially for the youths, the establishment of a knowledge-based culture centre in Grand Bay, and a push to extend pioneer status to farmers and fisherfolks, who he claims has been unfairly treated by the DLP despite the decades-old loyalty.

As it relates to funding for these projects, he proudly declared, "I am not afraid of Skerrit."

"I am not the other Labour palreps or the opposition. He will not deprive the people of Grand Bay of what they deserve no more. If he refuse (sic) to give me what I need for my people we will rally and take action. I am ready to lead and I am asking the Grand Bay people to follow," he said.

The bus driver says since his announcement to contest the by-election as an independent candidate, he has received massive support from fellow bus drivers who have attached white flags to their vehicles.

The United Workers Party (UWP) has since stated that they will not partake in the by-election in the absence of electoral reform and labelled Skerrit's proposed candidate as a danger posed by the "anti-Grand Bay alliance of Roosevelt Skerrit and Vince Henderson."

"This bye-election showdown of Skerrit versus the people of Grand Bay is no place for competition between political parties that will stand in the way of the people of Grand Bay uniting as one behind an independent candidate to fight for their independence, their democratic freedoms and the right to choose their own representatives, Adding, "The independent candidate must be supported by all patriotic, democratic and honest Dominicans who desire a better Dominica," the UWP said in a statement.

Neither, the Alternative People's Party (APP) nor the Dominica Freedom Party (DFP) has publicly announced their decision to contest the upcoming by-election; however, sources within both parties said the parties will abstain.