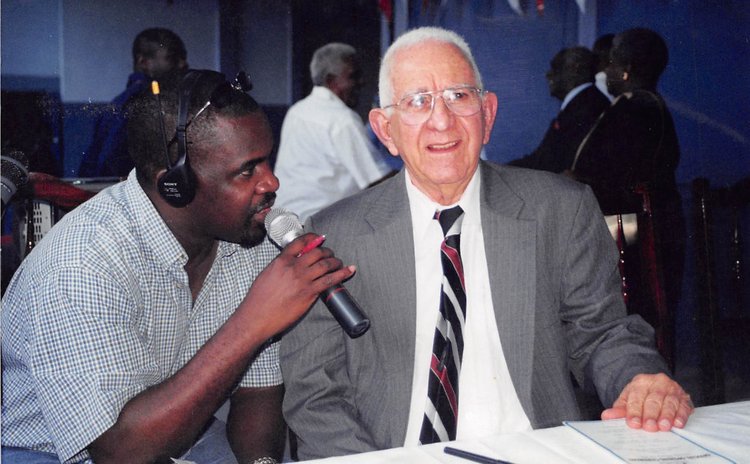 Here's a brief history of the Astaphan family in Dominica and the business that Waddy Astaphan built.

Originally from Lebanon, Joseph Anthony Astaphan was the first Astaphan to set foot on Dominican soil. The year was 1933 and he was about 30 years old.

After arriving in Dominica, the first thing Joseph Anthony Astaphan did was to get into shop keeping. From his first grocery shop on Hanover Street, he moved onto Old Street opening another shop there while he and his family lived upstairs.

In 1941, his 17-year-old son Waddy began working with him in the shops. Waddy Astaphan became the Chairman of one of Dominica's leading supermarkets.

"We grew. Soon we had another store. In all we had three stores. The store on Old Street was the grocery store, on Hanover Street, the textile store and on the Bayfront, a hardware and wholesale store."

Waddy said his father and himself were also involved in exporting produce, such as cocoa, bay oil, vanilla and spices. Then they bought the property where Astaphan is now located today, on King George V Street in Roseau.

They had warehouses and a garage at Fond Cole', these were soon upgraded. Once at the new location, most of their exporting businesses were curtailed. The business was called Astaphan Shopping Centre. They made foam mattresses, manufactured clothing, and continued their shipping business to some extent.

Of his father, Waddy Astaphan told the Sun a few years ago: "He was an easy-going family man. Both our parents died in their 80's in Dominica. They taught us to be generous and kind which is why J. Astaphan and Co.(1970) Ltd currently employs 300 permanent staffs and at Christmas time we employ 100 part-timers. Astaphans is what it is today because we learnt from the best, we make shopping affordable for all Dominicans."

In February 2001 J. Astaphan and Co (1970) Ltd opened its superstore and Waddy claimed then that he had catered for every Dominican to have their little square in his store.

"It's a big building which covers approximately 70,000 square feet. Maybe more than one square foot for every inhabitant of Dominica," Astaphan told the official opening ceremony of the company's department store on King George V Street in Roseau.

"It may be a world record. I tried to get it in the Guinness Book of Records but they told me it wasn't important enough," said a joking Waddy Astaphan as he defiantly struggled to present his speech.

Waddy Astaphan was then 77 and although he suffered a stroke a few years ago he has not stopped working.

"He is sending out about 60 memos per day," said the then Personnel and Public Relations Manager Dermott Southwell. "This business was started by my father having not more than fifty pounds, roughly two hundred dollars' worth of stuff," said Waddy. When the company moved to its new location on King George V Street in 1960 Astaphan said he "thought then there would be no reason for expansion". But Hurricane David in 1979 destroyed the building. This was followed by a 12-year battle with the Company's insurers for a claim settlement.

"The insurers thought that the company could have recovered a lot of its stock. They probably did not appreciate the condition Dominica was at that time," Southwell told The Sun. "There was an arbitration, the Company won the arbitration but the insurance company was still not satisfied. Therefore the Company went to court."

After winning the court battle the Company decided to use the money it won to rebuild and expand the store. It may have cost the company approximately five million dollars.

What is the secret of the success of Astaphan?

And then there was the almost legendary frugality and toughness of Waddy Astaphan.