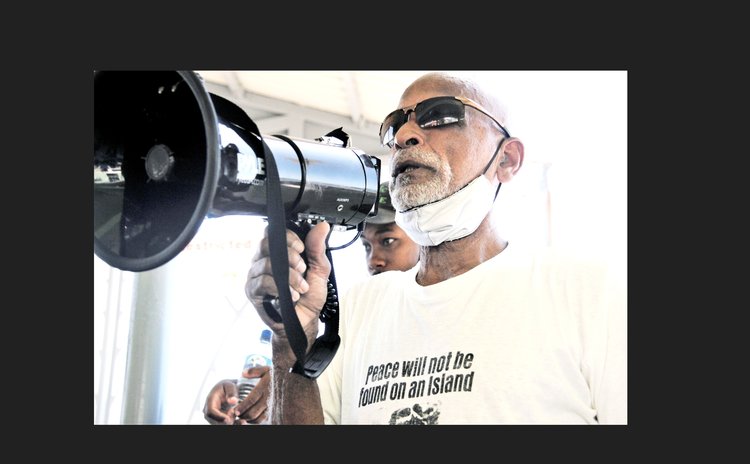 At the Wednesday Walk- Atherton Martin speaks in a loudspeaker

"First they charged us for talking and said that we're inciting violence," said Julius 'Blessings' Anthony. "Now they're going to charge us for walking by stating that we did not receive permission. So ask yourself, are we really a democratic country?".

What started off as a peaceful walk for "peace, justice, and prosperity" in Dominica will soon land Atherton "Athie" Martin, a Dominican agronomist, environmentalist, and social activist, in Dominica's court to answer to the charges of breach of Dominica's Public Order Act.

But quite to the contrary, of being intimidated by the recent disclosure from the police that he will soon be charged for organizing and executing the weekly walk which seeks to bring about change, Martin says that he feels emboldened and even more so reenergized.

Last month, a few hours after Martin announced his intent to start the walk every Wednesday from 10 am, Chief of Police Daniel Carbon expressed his disapproval in a statement. He said the law makes provision for the lawful holding of any walk, march, or protest action and in his capacity as the head of the police, he had not received any request for the activity.

Unalarmed, Martin proceeded with the activity which has been held for three consecutive weeks-attracting a large crowd.

However, following their most recent walk on April 13, Martin was visited that afternoon by acting inspector Mervin Andrew who informed him that based on legal advice in the police department, is that by helping to organize and to lead and participate in the first two walks, he was in violation of Section Five of the Public Order Act and would therefore be charged in the upcoming days.

The leader of the walk maintains his position that notwithstanding what the Public Order Act may say about seeking permission, the weekly walk -which he says is still on- in his view, and in the view of legal counsel, is not a procession and as such, does not require prior authority or permission from the Commissioner of Police.

He further points out that the supreme law of the country, which is the constitution of the Commonwealth of Dominica which overrides any other law, guarantees citizens freedom of association and freedom of movement, and places no prior prerequisites on seeking permission to do activities such as walking.

Martin holds the view that a lot of the recent actions which have been taking place in Dominica that threaten the peace and calm of our society form part of the agenda of a few people to twist and turn matters to their advantage or the advantage of their organization.

Dominica's Public Order Act, Chapter 15:01 states, "It shall be unlawful for any public procession to take place unless a permit has been issued in respect thereof in accordance with this Act.

"Every application made in accordance with subsection (1) shall contain particulars of the point of departure, route, and point of termination of the public procession to which the application relates and the hours between which the procession will take place".

According to the Act, any person guilty of an offence against this Act is liable on summary conviction to a fine of $10,000 or imprisonment for six months.