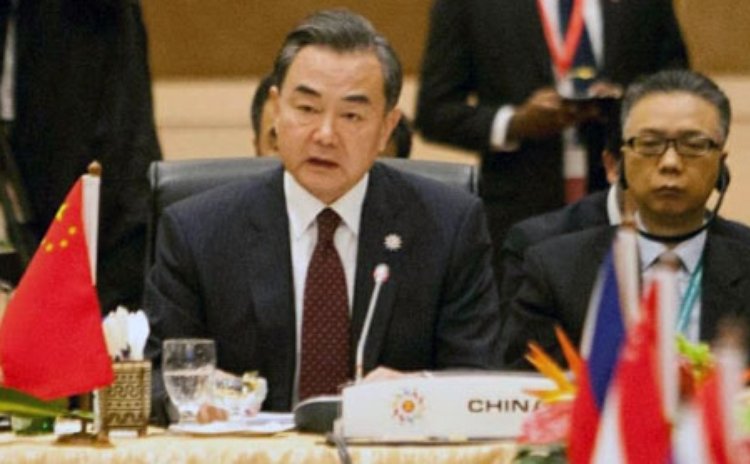 First, the situation in the South China Sea is stable on the whole, and there is no possibility of major conflicts. China therefore objects to any non-constructive words or deeds that attempt to exaggerate the disagreements, hype up confrontation and heat up tensions, which do not conform to reality.

As for the disputes on Nansha islands and reefs, this is a long-standing issue. The South China Sea Islands are China's territory. There is a history of two thousand years since China discovered and named the islands in the South China Sea. This year marks the 70th anniversary of the victory of the Second World War. Seventy years ago, pursuant to the Cairo Declaration and the Potsdam Proclamation, China lawfully recovered the Nansha and Xisha Islands which were illegally occupied by Japan and resumed exercise of sovereignty. As a matter of fact, the military vessels China used in recovering the islands were provided by the United States, an Allied Nation. This historical fact must have been recorded in the archives of the countries you represent. It was not until the 1970s when there were reports about oil under the South China Sea that some countries began to invade and occupy Nansha islands and reefs, undermining China's lawful rights and interests. According to international law, China has the right to defend its sovereignty, rights and interests, and China has the right to prevent the repeat of such illegal moves as encroaching upon China's lawful rights and interests.

Another example is that in 1999, the Philippines illegally "stranded" an old warship on the Ren'ai Reef, which is part of China's Nansha Islands. When China made representations, the Philippines claimed that it could not tow the warship away due to "the lack of spare parts". Later, the Philippine side indicated to the Chinese side that it would not be the first country to violate the Declaration on the Conduct of Parties in the South China Sea (DOC). Now 15 years have passed and the old warship has already become extremely rusty. The Philippines, instead of keeping its promise of removing the warship, has publicly stated that it had stealthily transported cement and other building materials to the warship in order to reinforce the installation. On 14 March, the Department of Foreign Affairs of the Philippines admitted that the very purpose of grounding the warship on the Ren'ai Reef was to occupy it. The Philippines has exposed its own lie of 15 years and failed to fulfill its own commitment. What international credibility is there in the conduct of the Philippines?

Just now, the delegate of Japan also mentioned the South China Sea issue and claimed that all artificial land features cannot generate any legal rights. But let's first have a look at what Japan has done. Over the past years, Japan spent 10 billion yen building the Rock of Okinotori, turning this tiny rock on the sea into a man-made island with steel bars and cement. And on that basis, Japan submitted its claim to the United Nations over the continental shelf beyond the 200-nautical-mile exclusive economic zone. The majority members of the international community found Japan's claim inconceivable and did not accept it. So before making comments on others, Japan had better first reflect on what itself has said or done. China is different from Japan. Our claim over rights in the South China Sea has long been in existence. We don't need to strengthen our position through land reclamation.

In fact, China is a victim on the South China Sea issue. Yet, with a view to upholding peace and stability in the South China Sea, we have exercised utmost restraint. Here is China's basic proposition: we seek to peacefully resolve disputes through negotiation and consultation on the basis of respecting historical facts and in accordance with international law, including the United Nations Convention on the Law of the Sea (UNCLOS). This position will not change. Through friendly consultations, China and ASEAN countries have developed a full set of mechanisms to properly handle the South China Sea issue. First, the issue shall be resolved through a dual-track approach, which means specific disputes should be addressed peacefully by parties directly concerned through consultation and negotiation. This is stipulated in Article 4 of the DOC, and it is also a joint commitment by China and the 10 ASEAN countries. The dual-track approach also means that peace and stability in the South China Sea shall be jointly upheld by China and ASEAN countries. I would like everyone to know that China and ASEAN are fully capable of maintaining peace in this body of water. Second, the parties shall implement the DOC in good faith and work toward a Code of Conduct (COC) through consultation. Now, smooth progress has been made in implementing the DOC, and COC consultation is also moving forward. In less than two years since the beginning of the consultation, we have already adopted two lists of commonalities, started consultation on "crucial and complex issues", and agreed to establish two hotline platforms which will be up and running soon. Third, China has taken the initiative to propose the formulation of "preventive measures on managing perils at sea". On this new platform, various parties may put forward proposals and ideas for discussion. If consensus is reached, action may follow.

Speaking of proposals, the US side recently proposed "three stops". But in our view, the US proposal is not feasible. For instance, what is to be stopped? As parties have different positions, what are the criteria for stopping? Who will set the specific criteria? There is no answer to these questions. That said, China still welcomes constructive suggestions from all countries on maintaining peace and stability in the South China Sea. But such suggestions must be feasible and, more importantly, should not impose double standards.

As for the land reclamation in the South China Sea which is of interest to some countries, it is nothing new and does not start with China. In other words, people have been bringing changes to the "status quo" all these years. It was only recently that China, for the first time, carried out certain construction on some stationed islands and reefs in the Nansha Islands in order to improve the working and living conditions of personnel there. In the process, we have enforced strict environmental standards. At the end of June, China announced the completion of land reclamation. Next, we will build facilities mainly for public good purposes, including multi-functional lighthouse, search and rescue facilities for maritime emergencies, meteorological observatory station, maritime scientific and research center, as well as medical and first aid facilities. China stands ready to open these facilities to other countries upon completion. As the largest littoral state in the South China Sea, China has the capability and obligation to provide regional countries with these much needed public goods at sea.

At the EAS Foreign Ministers' Meeting and the ARF Foreign Ministers' Meeting, the Philippines twice mentioned the South China Sea arbitration case in an attempt to smear China. I wish to make a rebuttal by facts. First, to settle disputes through direct negotiation and consultation by countries directly concerned is what the UN Charter encourages and a common international practice. More importantly, it is also the explicit provision of the DOC. That is why China always proposes bilateral dialogue with the Philippines, which is still valid today. However, up till the present moment, the Philippines has stubbornly rejected our proposal. The Philippine response is very unusual. Normally, before international arbitration proceedings are initiated, consensus would have been reached among countries concerned. However, in this case, the Philippines neither informed China beforehand nor sought China's consent. Instead, it chose to unilaterally go ahead with the arbitration. China finds such an action hard to understand except that the Philippines is pursuing a hidden agenda. The Philippines should have known that as early as in 2006, China made a declaration in accordance with Article 298 of the UNCLOS to exclude such disputes from arbitration, which is a lawful and legitimate right of China. The Philippines knew only too well that China would never accept arbitration on this matter, yet it insisted on pursuing the so-called arbitration with no regard to Article 4 of the DOC and its earlier agreement with China to settle dispute through bilateral channels. So why did it do this? There can be only one explanation, that is, it wants to provoke confrontation with China. But, will such practice by the Philippines solve the problem once and for all? Does it serve the fundamental interests of the Philippines and its people? I think the answer is "No". People of the Philippines deserve the truth, and the future of the Philippines should not be held hostage by a tiny number of individuals. China advises the Philippines not to go further down the dead alley. China's door is still open for the Philippines to have dialogue with us. After all, our two countries are inseparable neighbors. We advise you to return to the right track. I believe that as long as both sides get down to serious talk, we will eventually find a solution.