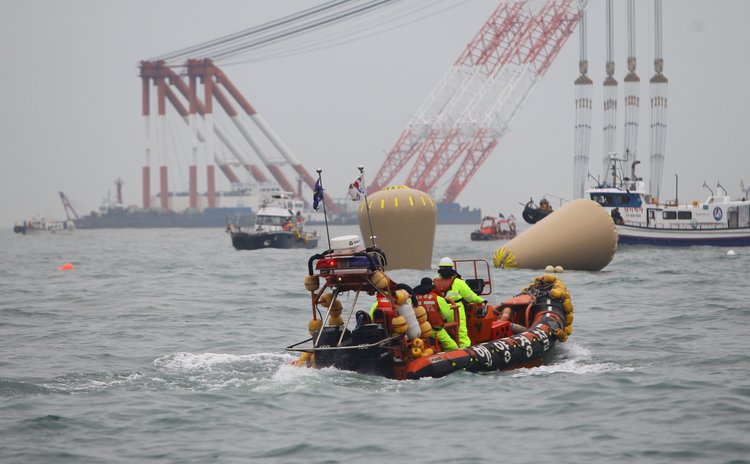 South Korean authorities are seeking arrest warrants for the captain and two crew members of a ship that sank off the country's southern coast on Wednesday.

Reports said the ferry's third mate, with only one year of navigational experience, was at the helm of the vessel when it encountered trouble.

The ferry was carrying 475 people, including over 300 high school students, on a trip to a southern resort island, when it capsized and sank.

Twenty-eight people are now confirmed dead and about 270 others remain missing.

Hundreds of rescuers struggling to get inside the sunken South Korean ferry Sewol, in a frantic search for 268 people who remain unaccounted for.

The ship, traveling from Incheon to the resort island of Jeju, capsized 20 km off the coast, hours after sending a distress call on Wednesday morning.

A majority of the ferry's passengers were high school students on a field trip. Twenty-eight people were officially declared dead and 179 were rescued.

On Friday, no sign of the vessel could be seen above water, and divers pumped air into the ship in an attempt to sustain any survivors.

It's not yet clear what caused the ship to list at a severe angle and flip over.

The Coast Guard said the possibility of the ferry hitting an underwater rock remains low as images show there are few submerged rocks in the waters.

Officials said the tragedy occurred when the ferry was making a turn. At the time, the ship's third mate was at the helm.

The 26-year-old mate only had one year of experience steering ships and five months on Sewol.

Investigators are looking at whether the third mate ordered the turn at an angle that was so sharp that it caused the ship to tilt.

Meanwhile, authorities are also investigating whether a quicker evacuation order by the captain could have saved lives.

Some reports said a transportation official recommended an evacuation, about five minutes after the distress call was made.

But it was not until 30 minutes later when the captain gave the order. It's not known yet when the 68-year-old captain left the ship. He has apologized for the loss of life, but has not spoken publicly about his decision making.

The Chinese embassy confirmed on Friday that two more Chinese nationals, one male and the other female were among the missing passengers.

Altogether, four Chinese nationals were onboard the ill-fated ferry. All remain missing.