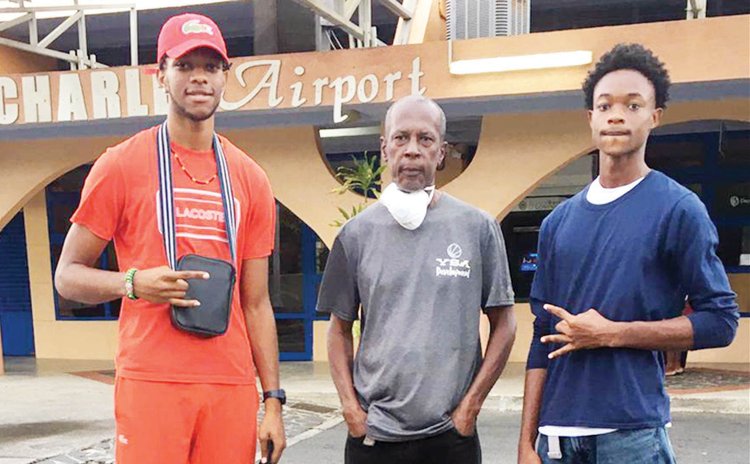 Although OO Washers did not win the coveted inaugural PBA Championship, they were victorious in subsequent years with Kirtis Langlais, Wayne Augustine, Augustus Hamilton, Reginald Thomas, and their last-minute, "midnight deadline" trade for Elroy Mathew. Their mascot "Alsatian Bruce" outfitted with team colours, was a constant booster at their games.

On both occasions Wash-way coached the squad while they were preparing for the tours but he did not travel with them, allowing another person to do the coaching during the trips.

Assisting Youth Players Obtain Scholarships: As was noted above, apart from the early days of OO Washers, Adenauer Douglas did not play much basketball. Instead, he directed much of his extra-curricular energies towards other aspects of basketball. His coaching efforts, from the senior national basketball team down to an Under-13 team, were presented in Part I. Hence, the unofficial title of "Coach Wash-way" is most fitting.

Coach Wash-way has used his contacts and talents to assist several young Dominican basketball players to obtain athletic scholarships to study and play basketball in the United States, and to date most have made a good name for themselves playing at the National Collegiate Athletic Association (NCAA) level in the USA, and even further. Coach is extremely proud of his "students".

Wash-way's "programme" began in the early 1990s with a very strong academic leaning, and many of the players later went on to play at college level.

Otis George played on the University of Louisville Cardinals in Kentucky, and subsequently played in the Development League of the NBA i.e., the "B" League. He also played with New York Knicks in the NBA Summer League, and this was followed by executing contracts in Italy and South Korea.

Brian Zamore first played with the Florida A & M University Rattlers and subsequently in the Latin American League in Mexico.

Brian Mason performed creditably on the University of South Carolina A & T Gamecocks and subsequently went on to play in Europe. Fletcher Harry and Julius Avril played at Southeast Community College in Nebraska, while Sylvere Bryan played with the University of Tampa Spartans in Florida, and professional basketball in France and Italy.

Beginning in 2019, Brian Zamore, an alumnus of Adenauer's programme teamed up with Coach Wash-way and began collaborating to continue the programme. To date, two young players have been the beneficiaries of that collaboration.

Brian Zamore and the other beneficiaries of Wash-way's programme are very appreciative and speak highly of Coach Wash-way for assisting them in deciding on career choices, bearing in mind the programme's strong athletic and academic values.

Warshoa's Other Sporting Caps: Adenauer's sporting energies extend beyond the coach's box on the basketball court. Firstly, he assisted in organizing football in Portsmouth in the 1970s and formed the Mang Rovers football team in 1974.

He was also a member of Dominica's 20-member team at the 1972 Windward Islands Inter-Schools Games in Grenada.

Remarks: So, that and more is the man Adenauer "Wash-way" Douglas, a member of Dominica's basketball fraternity who has not played much basketball, but who has made significant contributions to the overall development of the sport in Portsmouth and Dominica at large.

Jump Ball takes this opportunity to wish Adenauer and all the beneficiaries of his coaching and scouting programme the best in their current and future endeavors.

Jump Ball thanks Adenauer and Brian Zamore for their invaluable contributions to this article. Additional information obtained from archived newspapers.