"We will die first" 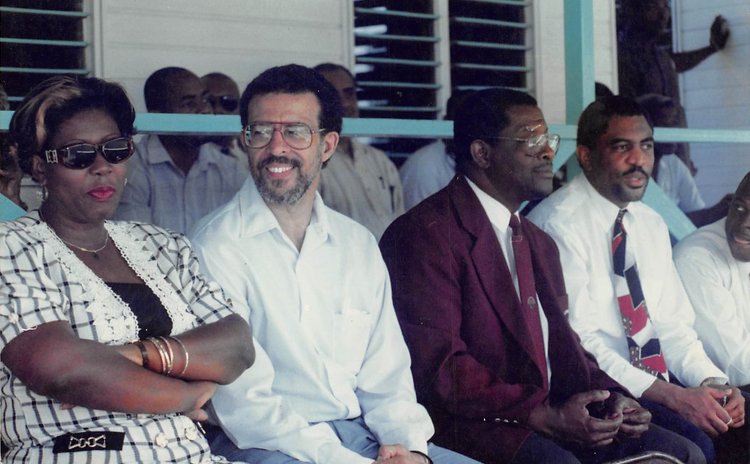 Edison James , second right, and some members of the UWP administration

A potentially explosive situation is simmering in the north-east between persons opposed to the acquiring of their lands for the construction of the international airport and the Government.

About 20 persons in the Wesley/Woodford Hill area who say they are enraged at Government's plans told The Sun last week they will die but will not move to facilitate the building of the airport.

Flora Archer, 50, a Woodford Hill farmer said: "They'll have to bury me because I won't move. My land is near the terminal, they'll bury me at the terminal."

Government intends to acquire 5.175 acres of her land.

"I will remain on my land, Sir." Mrs. Liaud Davis of Wesley told a Sun reporter. "I don't want their money. I don't want nothing besides my piece of land my father leave for me." Mr. Nathaniel Peter of Woodford Hill whose 31/2 acres is located in the centre of the proposed airport said: "I will stand until their bulldozer pass on me, but I will stand."

The government of Prime Minister Edison James has made plans for the construction of a modern international airport capable of accommodating Boeing 767 jets in the Woodford Hill and Wesley areas on Dominica's north east coast.

This involves the purchase of private agricultural lands and houses in the area. A new school is to be rebuilt to replace the St., Andrews High School, which is to be demolished. The government says the airport project will cost about US $100 million. A few lending agencies, banks and friendly governments have pledged financial support to the construction of the airport. In a few months Government intends to hold a groundbreaking ceremony to begin the construction phase.

Meanwhile, there have been voices of protest against the economic feasibility of the project, its location environment impact and the social dislocation of the farmers and residents of Wesley/ Woodford Hill. Among the major protesters are the Dominica Conservation Association, concerned individuals and a group of farmers and residents of the area where the airport is to be located.

The group of farmers told The Sun last week that Government has not informed them of the plans to purchase the land, nor have they negotiated with them. But an independent source closely associated with the land acquisition process told The Sun that meetings has been held with farmers of both communities. In addition an office was located in the area for the past six months, the source said.

Some of the concerned farmers of the Wesley/Woodford Hill area say government officials had made monetary offers. Mrs., Flora Archer said government offered her $175,000 for 5.175 acres at $30,000 an acre.

Mr. Nathaniel Peter is expected to receive $16,706 for 31/2' acres of prime agricultural crops and $66,000 for the land. Another farmer who owns six acres of land in the middle of the proposed runway is expected to be paid $21,687 for his crops and $102,000 for his land, according to the assessment.

The group of farmers who were part of a protest through the streets of Roseau recently plans to continue holding meetings throughout Dominica.

In the meantime, Government is moving ahead with plans for the development of the airport facility. According to government officials the airport is expected to impact significantly on tourism development, increase employment in the area of Woodford Hill/Wesley and reduce the persistent inconvenience of air travelers to Dominica.