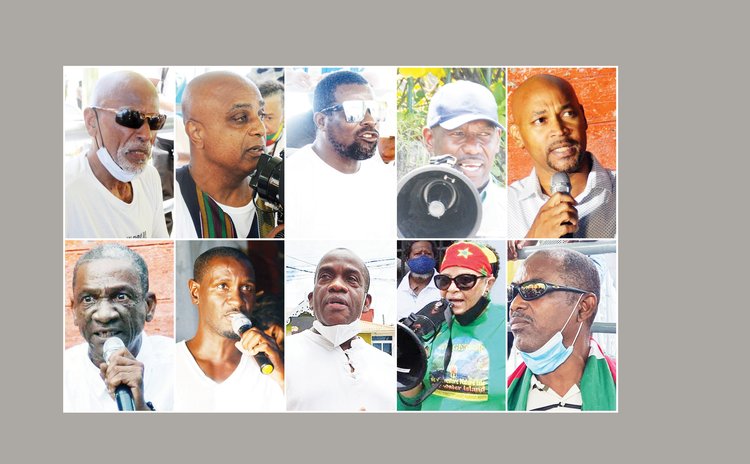 People charged by police for alleged infringement of the Riot Act

"They can bring ten, fifty even 100 summons for walking, but believe me when I say nothing will stop me from walking on a Wednesday," declared Julius "Handbag" Gabriel, one out of the few, thus far, to be charged for participating in the weekly walk.

Last week, the police made good on their threat in preferring criminal charges against ten participants of the Wednesday Walk for 'Peace, Justice, and Prosperity;" six of whom were present at the legal proceeding on May 19, 2022.

According to the charge of Police Sergeant Mervin Andrew, on March 30, 2022,

Roseau North Parliamentary Representative, Daniel "Danny" Lugay, and popular radio caller Oliver "Boots on the Ground" Walsh took part in a public procession in the city of Roseau without the written permission of the Commissioner of Police to do so, contrary to the provision of section 5 (4)(a) o the Public Order Act chapter 15:01 of the consolidated laws of Dominica of 2017.

Lugay and Walsh, who were both represented by attorney-at-law David Bruney, pleaded not guilty to the charge.

Also making an appearance before the court, was Dominica's Parliamentary Opposition Leader, Lennox Linton, lead organizer of the walk Atherton "Athie" Martin, and co-organizer Sarah-Ann LaRocque, who were all slapped with two charges for their alleged involvement in the activities on March 30 and April 6.

The trio who were all represented by Ronald Charles and Wayne Marsh also pleaded not guilty to the offence.

A similar plea was also heard from Davidson "Pyro" Julien of Newtown who stood charged with the same offence which allegedly occurred on April 6.

However, when called, these defendants were not present at the court hearing to which Inspector Cadette told the court that they may not have been served as there was no return of service for the summons issued for the four men.

Magistrate Williams adjourned the matters to October 14, 2022, for reporting and the four absentees are to be summoned for that date, while the six others were warned in court.

Following his court appearance, the organiser of the walk told Sun that the charges brought against him and other individuals for walking will not stand in the court of law, as concluded by various attorneys.

"We understand that the charges that they have brought to us are trumped up and are designed to investigate, intimidate, harass and scatter, but it cannot stand in law," Martin said.

According to the Dominican agronomist, environmentalist, and social activist, plans will be made to have those involved sued, for what he labeled as harassment.

The Wednesday Walk, which began on March 30, 2022, was initially condemned by Chief of Police, Daniel Carbon. In a statement issued to the media a day before the first walk, Carbon said the law makes provision for the lawful holding of any walk, march, or protest action. However, in his capacity as the head of the Commonwealth of Dominica Police Force (CDPF), he said, he had not received any request nor granted permission for the activity.

But Martin proceeded with the walks which have been held for eight consecutive weeks-attracting a large crowd- as, according to him, their walks are not a procession and as such, do not require prior authority or permission from the Commissioner of Police.

He added that the supreme law of the country, which is the constitution of the Commonwealth of Dominica, overrides any other law and guarantees citizens freedom of association, and freedom of movement, and places no prior prerequisites on seeking permission to do activities such as walking.

For his part, the leader of the United Workers Party (UWP) Lennox Linton views those charges as nothing more than a plot to jail politicians who are not in support of the ruling Skerrit-led Dominica Labour Party (DLP) administration.

"It is a plot against politicians who are opposed to Roosevelt Skerrit and citizens of Dominica known to be critical of his administration and known to be opposed to the direction of governance in Dominica," Linton stated.

He further opined that people like those who are constantly being dragged to court, are in the pursuit of "standing for what's right in Dominica."

The Marigot MP dubbed the walk as nothing more and nothing less than the citizens exercising their right and freedom provided in the Constitution of 1978.

Based on Dominica's Public Order Act, Chapter 15:01 which the ten have been charged with, any person guilty of an offence against this Act is liable on summary conviction to a fine of EC$10,000 or imprisonment for six months.