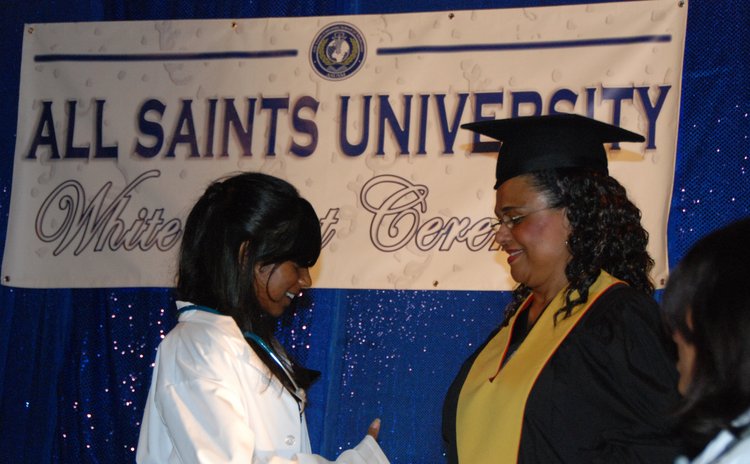 Rather than finish the journey, the students were sent back to Nigeria, first flown to Panama, then Brazil, then Togo, then Nigeria this past Wednesday. A trip of 22 hours ballooned into a nightmarish five-day ordeal, with the return trip costing students N575,000. During the period, the teenagers slept in airport lobbies unattended.

Though the World Health Organization applauded Nigeria for being free of Ebola earlier this week, a dangerous stigma continues to follow Nigerians and other West Africans, propelled by international panic that West Africans are carrying or spreading the disease.

Just this week, a group of nine West African students traveling to the Commonwealth of Dominica in the Caribbean were barred from entry to Saint Martin, a stop en route to Dominica.

The students, who planned to study at the All Saints Medical School in Dominica, were told that they could not enter the island to catch the 30 minute connecting flight that would bring them to Dominica because of the Ebola outbreak in West Africa.

The students, four female and five male, left Lagos, Nigeria aboard Ethiopian Airlines on Saturday, October 18th, billed to arrive in Dominica on Sunday the 19th. Following a 22-hour flight, the students arrived in St. Martin, yet were refused entry to the island because of concern regarding Ebola.

This rejection came after the students showed evidence that they tested negative for the virus. None of the nine, who came from both Nigeria and Ghana, were ever even exposed to infected persons.

Rather than finish the journey, the students were sent back to Nigeria, first flown to Panama, then Brazil, then Togo, then Nigeria this past Wednesday. A trip of 22 hours ballooned into a nightmarish five-day ordeal, with the return trip costing students N575,000. During the period, the teenagers slept in airport lobbies unattended, without any amenities. Neither the parents nor the school were notified of the developments.

"They treated them like deportees," a concerned parent told SaharaReporters. "If teenagers can be treated like this, then what are the odds for other people?"

Attempts to reach health and immigration officials in Saint Martin for answers were met with several different—and conflicting—responses. Some officials said a travel ban on West African countries affected by Ebola was in place, and some said that no such measure existed.

Most interestingly, several officials at the sole airport on the island of St. Martin, Princess Juliana International Airport, said that no ban on travel from Ebola-affected countries was in place. "There is no ban," a security officer at the airport said. "Not to my knowledge, not yet."

The security official and others in the airport's executive office had no knowledge of any kind of official ban, instead referring SaharaReporters to the island's Office of Immigration and Ministry of Health.

Clear answers were not given by anyone in the government of St. Martin either. Responding staff had no information at all on a possible ban or why students from countries unaffected by Ebola, neither did the country's website.

An administrative assistant in the St. Martin Ministry of Health, Maria Henry, was the only source that said that such a ban existed. "We have a travel ban," she said.

Regardless of whether a ban exists or not, the response of St. Martin aiport and immigration officials to the teenage students seemed like a gross overreaction, seeing as there are no active cases of Ebola in either Nigeria or Ghana.

Even in the destination country, Dominica, government sources say there is no travel ban on travel from Ebola-affected West African countries.

"There is no ban," an anonymous source from the Ministry of Tourism said.

"I am worried that in a free world such as ours, certain countries, airlines and corporations can take such actions with impunity on law-abiding Nigerian citizens without fear of reprisal or remorse," a parent told SaharaReporters. "The emotional, physical and financial impact of this event on all involved should not be left to be suffered by these children and their parents alone."

"Imagine the nightmare and despair of the parents as well as the trauma these children have experienced," another parent said.

Though the students have since returned home, parents tell SaharaReporters that they are still working with All Saints Medical School to determine how these students can return to start school, and if students can be reimbursed for the return trip. Parents say they expect an answer on Monday, yet continue to request an official explanation from officials in St. Martin.

"We demand answers and an apology," parents said.